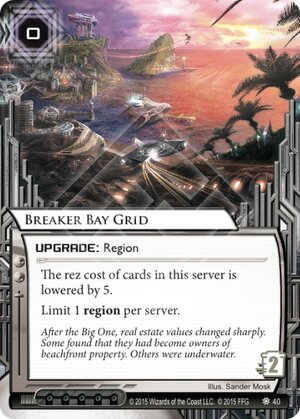 The rez cost of cards in this server is lowered by 5.

After the Big One, real estate value changed sharply. Some found that they had become owners of beachfront property. Others were underwater.
Illustrated by Sander Mosk
Decklists with this card

This review is based only on the math of the card and not actual testing. Everything here is early theory and should not be regarded otherwise. That out of the way lets look at the card.

Breaker bay grid is a neutral 0 influence region. What does it do? its an "asset economy" card except its not an asset. This card gives you credits every time you want to rez another asset or upgrade in the same server. Bear in mind that ICE is not installed in a server, but protecting it, so it does not help rezzing ICE. It would easily be quite broken if it did. Installing this on an eve campaign will net you 5 credits when/if you rez that eve, or 4 in case of adonis. Added to that if the runner doesnt pay the 2 extra to trash this it is possible it can be used again for another campaign. So in this regard its similar to cards like hedge funds or restructure: a burst 4-5 credits, with added upside in that it may refire. The downsides are there to compensate though; the card can be trashed in HQ or RnD or the campaign can be cleaned and the upgrade left by the runner to repeadetly security test on. Another way to use this upgrade is with other upgrades like Ash or Caprice niseii. Bear in mind that it is impossible to use it with grids like sansan. Often you would only get 2 credits this way, but a lot of upgrades could be stacked in a server, and the defensive upgrades help ensure the bay can be refired. Using it this way is more comparable with drip econ, but does not leave weak remotes for security testing or bank jobs. Finaly it is just another card that can be installed face down in a remote and look like a tonne of other cards. Maybe you can get the runner to think it's defending your agendas, or it itself is an agenda, and make the runners decisions to run less informed.

Do notice the rez cost is reduced as long as the grid is rezzed. This is not blue suns wet dream, but picking up the grid and then the adonis/root later is still good value for 2 clicks.

All in all this seems like an economy card with high potential, but do bear in mind that it does nothing on its own. It only gives the 2 4 5 or whatever number of credits if you can rez something on it. The card is easily tournament quality even if there won't be a deck for it right away it produces a lot of money rather quickly if a deck can ensure it firing, and pays off sometimes almost as early as the transactions, leaving a mark for the runner to deal with before it fires again. The card is however not usable in any and all decks like hedge funds, jackson howard, daily business show etc.

(Breaker Bay era)
GammaCodeX 56
Can't use with San San. — SlayerCNV 29 Apr 2015
Daily reminder that with The Root - this card becomes a pretty cool combo! Might not be able to use it for San San - but there are plenty of other uses for a 5 discount on assets! — Softman25 29 Apr 2015
It also can be combined with Awakening Center. — alex_monk 30 Apr 2015
Sry, but why can i not use it with SanSan? — Torf 4 May 2015
Nevermind... — Torf 4 May 2015
i did miss awakening center. I did not miss that you cannot use it with regions, i even specifically mentioned it can't be used on sansan"Bear in mind that it is impossible to use it with grids like sansan." — GammaCodeX 4 May 2015
3

Breaker Bay Grid seems like a bad card. . . to the untrained eye. But if we look at it as a piece of important asset economy, it becomes highly sought after for many glacier-style Corp builds (which are coming back in full force thanks in part to Clot).

Let's get down to brass tacks here: Breaker Bay DOES NOT AFFECT ICE COST. If that is a turn off to you, I recommend Amazon Industrial Zone instead. If my rulebook-aficionado friends out there are correct, the only way this will affect rez cost of ICE would be bioroids hosted on Awakening Center. You cannot use Breaker Bay with other regions as well (why would you want to anyway, this card is great!).

So if we cannot use it on ICE and other regions, that leaves the rest of the server upgrades and assets available. Here is a small number of excellent targets for Breaker Bay Grid: Eve Campaign, Adonis Campaign, Hostile Infrastructure, City Surveillance, Private Contracts, Will-o'-the-Wisp, Dedicated Response Team, The Board, Chairman Hiro, Director Haas, The Root, Eliza's Toybox, Strongbox, Daily Business Show, Bernice Mai, Red Herrings, Sundew, PAD Campaign, etc... The list goes on and on.

Breaker Bay Grid works best though with drip economy that is limited in nature, like the aforementioned Adonis Campaign and Eve Campaign since the credits get cleared off and the card gets trashed, opening a new slot for more drip econ. Blue Sun: Powering the Future builds that constantly bounce Adonis Campaign will love Breaker Bay, since it nets them an additional 4 each time they play and bounce it. Haas-Bioroid: Engineering the Future builds revolving around Breaker Bay will constantly be making huge amounts of moolah since they save the cash from rezzing an Eve Campaign after installing it for a huge 6 swing in their favor. So with these in mind, Breaker Bay Grid is powerful econ in the right hands.

But, let's consider for a moment the other uses it has: in Industrial Genomics: Growing Solutions, it can be host to a number of hard-to-deal-with upgrades on an otherwise-naked scoring server including Caprice Nisei, Ash 2X3ZB9CY, and Red Herrings, saving you some cash in the process; it can be used for constant taxation alongside Hostile Infrastructure or City Surveillance, guaranteeing a loss of credits or cards for the runner; when used with Isabel McGuire, it can get all your expensive assets out for a measly few .

If Breaker Bay Grid has one downside, it would be the 2 cost; since it costs you 0 to rez though, it constantly becomes a win-win scenario for the Corp as the runner wastes precious credits to trash it.

While it isn't the end-all-be-all to glacier decks, Breaker Bay Grid certainly helps those with heavy investments into assets and upgrades. It practically IS econ itself, preventing the Corp from blowing their hard-earned Hedge Fund on an Adonis Campaign, and if you can slot it into a glacier build, the money you'll save will have been well worth it, even if they do trash it once you get Eve Campaign for free.

(Breaker Bay era)
WardOfTheWoods 698
Good effort trying to justify Breaker Bay Grid. I'm not convinced by the suggested use with cards that cost only 1-2 credits to rez though. Also it doesn't work with Blue Sun / Adonis, as the rez cost reduction is permanent, so picking up Adonis or Eve in the same server gives Blue Sun back zero credits. — Ber 4 May 2015
Not if you pick up BBG first... But your point is absolutely important to keep in mind, as is the fact that ICE is not _in_ the server. — FarCryFromHuman 4 May 2015
I like the idea of Isabel McGuire! — lunaticcalm 4 May 2015
As someone else pointed out, it does not work with Blue Sun. I think it is decent for asset economy outside of that use case but once the runner see's it I think the odds of it and your newly rezzed asset getting trashed goes up dramatically. — Retraux 4 May 2015
Breaker Bay + Adonis still net 10 cr in 2 turns in a Blue Sun deck. If your server is good, it will stay. Raising Off the Grid might also be worthwhile btw. — spore 23 Jun 2015