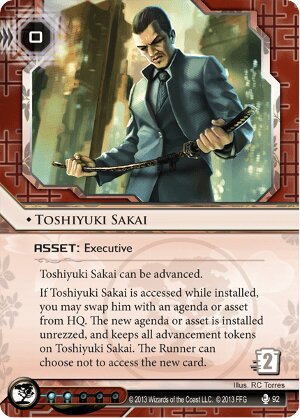 Toshiyuki Sakai can be advanced.

Illustrated by RC Torres
Decklists with this card

It is usually quite a challenge to design a card that is useful, but the key components of it's use are hidden away in the cards no-one has given the time of day to before. There are two dastardly combos that take this card from an interesting mind-game creator to a powerful disruptive force on the board.

The first combo is with the most under-hyped of the new Weyland identities, Gagarin Deep Space. TS now creates an extra credit drain on access of the second card. The combination of multiple TS with this identity changes the mind-games completely, now we have a game of "agenda chicken", with the corporation deciding when the runner will stop paying credits for access to create an agenda scoring window, with the runner thinking they've managed to successfully leave a TS stranded on the field. For additional support, a copy of Elizabeth Mills can recover any stranded TS from the board.

The second is with an incredibly underused bioroid - Hudson 1.0, his ability prevents the runner from accessing the second card placed into the server, as it would put the access over 1 card. This allows a savvy corp to either tax credits and clicks from a runner's economy to get through good ol' Hudson, or provides another interesting scoring window!

It's a fun card, and can be very powerful in the right combos, turning another few underused cards into stronger contenders.

(The Valley era)
jpsaxby 50
Those are two incredible combos I did not think of at all! I want to build decks around them, now — Scorpi12 6 Apr 2015
Could you further explain your comment about Elizabeth Mills? — Yubinshan 6 Apr 2015
Elizabeth Mill or Isabel McGuire? — Absolium 6 Apr 2015
I'm sure he meant Isabel. Lizzie Mills just removes bad pub and trashes locations, neither of which is relevant here. — tiedyedvortex 6 Apr 2015
Those combinations are delicious. Well done, sir. — robofrogg 6 Apr 2015
There was also a comment on [Alix T4LB07](/en/card/03008) related to this card: "The card that is swapped with Toshiyuki Sakai is installed(FAQ). Infinite loop created by two Toshiyuki Sakai places infinite counter on Alix T4LB07. Combo with Gagarin deep space. Runner will afraid of accessing card that is swapped." -vjhorse90 As has been said by others, there are combos that this card works quite well with. — tendermovement 7 Apr 2015
Sorry about the formatting... I thought you could refer to cards in comments just the same as in reviews. — tendermovement 7 Apr 2015
You forgot about [Plan B] — Beyo 4 Oct 2015
Can anyone shed light on the interaction with Mushin no Shin? If I play Mushin no Shin to bring out a Toshiyuki Sakai with 3 counters on it, then the runner runs and accesses it, does Toshiyuki Sakai's effect still work even though Mushin no Shin says you can't rez or score it until your next turn? — Orgodemir2 30 Dec 2015
TS will still fire his ability despite being played through Mushin. His ability procs from being accessed, which is not the same as being rezzed or scored. — iBreatheBullets 24 May 2016
10

Unless I'm mistaken, if you play this in Gagarin they have to pay an extra credit to access the new card. That could be kind of hilarious if you have another one in hand and just cycle them until the runner gives up :P

(The Universe of Tomorrow era)
Yziel 128
I just rearranged my life around making this happen. Nothing else matters. — PapaBear 9 Oct 2015
2

Oh man, how I love this card. The trash cost is low, sure and probably Sakai ends up in Archives when accessed in R&D or HQ but...

Rez cost of this card is zero but this is not relevant because 99,9% time you don't want to rez it. Play and slowly advance or put on table with Mushin No Shin. Three token on it and the fun starts, add another one and Runner may starting to worry.

My favorite combo is replacing Toshiyuki Sakai with Plan B or Ronin. I've played some games when Plan B was crucial to victory because in my meta I found players that run like crazy even against Jinteki no matter the risk. Even 3 tokes are enough but with four is also extremely handy to replace it with Ronin Medical Breakthrough NAPD Contract GRNDL Refinery Thomas Haas or even funny Haas Arcology AI. And remember you may swap this with ANY agenda or asset so even things like Psychic Field may work ;) With influence of 2 it may be seldom seen in other factions and if you put this in Industrial Genomics: Growing Solutions which become lately my favorite Jinteki ID, anything that is replaced with Toshiyuki Sakai may have trashing cost simply to high for Runner to afford. Of course there are limitations - Drive By notable example but still for someone like me, who loves mind games it's 10/10

(The Universe of Tomorrow era)
Beyo 6
2

The card should really only be used if one can somehow capitalise on the advancements that are put on it. Either by luring the runner in and making use of the mindgame that follows, or by using Trick of Light to move the advancements off it and scoring agendas that way.

It can let you score a big agenda by trickling advancements on it little by little while you wait for those Trick of Lights to come in, or it can allow you to flatline a careless runner if you have a Project Junebug in hand. Replacing it with a trap still leaves you with your advancement storage if the runner does not access.

Of course, one could just use a Project Junebug to achieve basically the same thing. In regard to storing advancements on a card.

Can anyone explain if there is any point to this card except for being a "tutor" for traps which you might not have had in-hand when you originally installed Toshiyuki? I can't really think of any point except to ensure that the runner has a chance to acccess a Snare! whether he runs your HQ or your remote. If the runner thought you only had non-advanceable traps, then maybe you could use Toshiyuki to make them think it's an agenda. But there are plenty of advanceable traps in the game (several in Jinteki), so I can't imagine any runner definitely thinking for sure that since this card has advancement tokens on it it's an agenda.