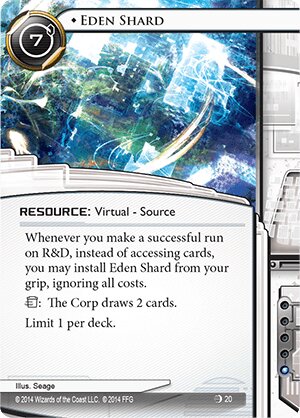 Whenever you make a successful run on R&D, instead of breaching R&D, you may install this program from your grip, ignoring all costs.

This card is almost as puzzling to me as Record Reconstructor. Without a Sweeps Week equivalent for runners, it seems to do nothing but help the corp. And in the few cases where it might be useful, namely vs an Accelerated Diagnostics + Power Shutdown, there are better options that cost the same, or less (if playing Shaper) influence: Sacrificial Construct.

So clearly this must be useful some place where Sacrificial Construct isn't, and that has to be due to the fact that it forces a draw. Maybe in a Data Leak Reversal deck, but it's not needed there. It can increase the rez cost of IQ, but also its strength. Presumably one could use this after the corp's final , and if they were at their maximum hand size, they now have to discard 2 cards. But they get to choose which 2, and a corp deck without 3 copies of Jackson Howard is about as rare as unicorns are in real life—that is to say, quite rare. But, I think we'll succeed in getting a narwhal to interbreed with a horse before this will see play.

(The Universe of Tomorrow era)
Pikeman 275
If Corp only has one card in hand, this could turn on a Legwork run. But that's pretty specific use. Also, Fisk Investment Seminar arguably doors Smyth — WayneMcPain 21 Sep 2015
Sorry. posting on phone. I was gonna say Fisk Investment Seminar arguably does anything you would want this to do and provides more benefit as well. Just can't be used mid run. — WayneMcPain 21 Sep 2015
I'm confused - how and why is this comparable with Sacraficial Construct? — AdamFitzgerald 21 Sep 2015
It's a multiaccess booster for both HQ and R&D. The former, as Wayne mentioned, with a legwork, and the latter as a way of digging past crap that you don't want on the second Medium or R&D interface run. — Bigguyforyou518 21 Sep 2015
@AdamFitzgerald - I was comparing it to Sacrificial Construct in the case of the AD/PS combo. — Pikeman 21 Sep 2015
@Pikeman But how is Sacrificial Construct useful against the AD/PS combo? — daytodave 21 Sep 2015
@Pikeman - Yes, but how does Sacrificial Construct help against the AD/PS combo? — daytodave 21 Sep 2015
Also, how does Sacrificial Construct combo with Replicator? — daytodave 21 Sep 2015
If you fire it following a turn where the corp ended on a full hand, then run as Fisk forcing another draw, that's six cards the corp is over hand size, plus one when they make their mandatory draw at the start of their turn. That's a lot of cards to manage and if you can keep up the pressure by recurring FIS and Eden Shard (Trope?), the corp will leave windows open for you to take advantage of... — StarryVeck 21 Sep 2015
Sacrificial Construct doesn't stop Power Shutdown "discard X cards" effect. Corp discards X cards, Runner chooses a program or piece of hardware to trash, then the runner could use sacrificial construct to save it. The cards are still discarded, which is all the AD/PS combo really cares about. — jdharper 22 Sep 2015
Well, the few times I've faced AD/PS, I would have had a fighting chance if not for having to trash most of my rig. That said, it doesn't see much play at my LGS as Fisk is ever present there. — Pikeman 25 Sep 2015
By the way, SC does *not* combo with Aesop's. — derin 15 Nov 2016
The reason Sac Con kills Shutdown combo isn't about stopping the rig damage from the initial Shutdown, it's for keeping Clot on the table through CVS. — Parzival 3 Jan 2017