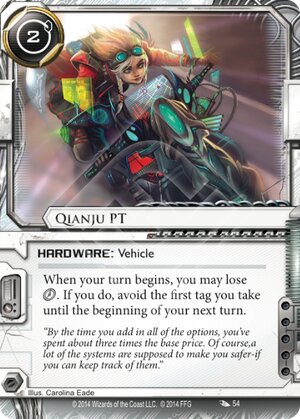 When your turn begins, you may lose click. If you do, prevent the first tag you would take until your next turn begins.

Illustrated by Carolina Eade
Decklists with this card

I'm sure everyone here has looked at Qianju PT and decided that it really isn't worth the deck slot, but I advise that criminals specifically take another look. First off it is cheaper than Plascrete Carapace by one credit, and that one credit can mean a lot with Andy setup. Second is that it pays for itself after one Account Siphon, and is an economy boost after 2 tags removed. All you need to do with this card is prevent 2 tags to get your moneys worth. I'll admit that I was not a fan of Qianju PT until the noob at our game group swapped out a Plascrete Carapace for a Qianju PT and proceeded to mop the floor with all of the players running SEA Source. It's also a good way to deal with Data Raven. We know Feedback Filter and Net Shield have become meta-dependent includes for certain decks. I advise you reconsider Qianju PT because we cannot know its true value until we test it more thoroughly.

(Order and Chaos era)
Kronosdev 45
It also combines extremely well with Rachel Beckman, if you have the econ to get both down. 4 clicks and invulnerable to 1 tag per turn is pretty game-changing in a lot of matchups. — lolpaca 9 Mar 2015
It combines well with Adjusted Prototype + Joshua B to get an extra click. — Him 4 May 2015
8

With the release of Data and Destiny we may now (11/2/2015) be at brief window in the meta wherein this card is worth a second look. New Angeles City Hall is fine, but it's brittle, and can be, if you're running against a super tagstormy deck, expensive. Plascrete Carapace and Paparazzi are solid options for scorch protection, but what use are they against the horrific existential threat that is The All-Seeing I? It's getting god-damn scary out there, and it may be time for something drastic.

And Qianju PT is drastic. Deck space is at a premium, and few runners are willing to include a card that perhaps hitherto, has been at the most a half-way decent way of saving a couple s and s in an Account Siphon heavy deck, and, at the least, some binder fodder with cool flavor. Moreover, a lost is a big price to pay as a preventative measure for a threat that may or may not be imminent. Adjusted Chronotype is an obvious counterpart to this card, but we quickly run into the issue of deck space. If you're going to run Qianju PT+Adjusted Chronotype in a quantity that ensures you will draw them when you need them, you'll be eating up at least three or four hyper-valuable deck slots (plus a not insubstantial amount of s and setup time). And with tags being a likelihood, but not a certainty, you may never even need to use them.

But you may not even end up needing to slot Adjusted Chronotype. Where I think Qianju PT really shines is in the "may". In the hands of even a semi-intuitive runner you may not need the support of Adjusted Chronotype to run this card effectively. If you can intuit that this Blue Sun just might not be vegan, or that this NEH might be something a little more than fast advance, you can, at whim, provide yourself with a safety that does not preclude you from running until you have enough s to beat them in a SEA Source contest or needing to stockpile enough /s to clear/avoid those tags.

I think that it may be worthwhile now, in this tag hell, to slap a couple Qianju PTs into your deck and just weather the inefficiency.