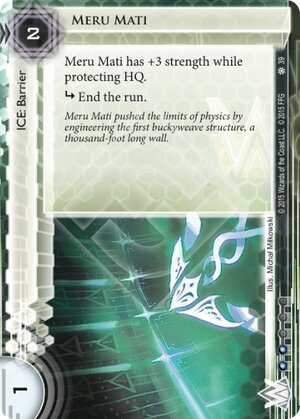 Meru Mati pushed the limits of physics by engineering the first buckyweave structure, a thousand-foot long wall.
Illustrated by Michał Miłkowski
Decklists with this card

Of the four ice in the 'pioneer' ice set, Meru Mati is quite plain and a bit underwhelming to read. (Others in the set are Gutenberg, Crick, and Turing).

To properly consider its merits, we should look at it on HQ and elsewhere separately:

So, it's outstanding value on HQ - especially against criminal runners that love to run all over a weakly defended HQ - and also sometimes useful on other servers. Overall, worth considering in Weyland decks, but the simple economic value it provides is unlikely to justify spending influence bringing it to other factions.

(Breaker Bay era)
Ber 2612
this is basically ice that helps a weyland rush deck work, and don't forget superior cyberwalls — cmcadvanced 9 May 2015
If only this could be advanced just like Ice Wall. But I guess it would be too strong then! — konradh 11 May 2015
1

A low cost barrier for the Corp to rez and for the runner to break. Installed on any server but HQ, this is a Wraparound without the AI defense, with one strength. Corroder, Cerberus "Lady" H1, Breach, even Inti can beat this easily.

The only way this is worth an inclusion in your deck is if it is on HQ. That boosts its strength to Eli 1.0 power, but 1 less to res but with one less subroutine. Again, cheaper to rez and cheaper to break, unless the runner clicks through. So, unless you get one in your opening hand when money is tight, Eli is more adaptable and doesn't have the same crippling focus on one server. Also, this card has twice the influence of Eli.

Not being able to be clicked through is the major upside to this card, but for the same effect you could use a Wraparound, Ice Wall, or even a Paper Wall to save on up front cash.

With its glaring weaknesses and mostly superior counterparts, it hard to justify an inclusion. It's best considered for a Weyland deck that forgot Ice Wall exists and somehow blew all of its influence on SEA Source and other NBN tag cards.

Speaking of, Weyland kill decks should consider Gutenberg, the R&D counterpart, instead.

(Breaker Bay era)
Steamwood 302
In Weyland, it's a free Influence answer to early Account Siphons — Father Tork 8 May 2015
On HQ it's more taxing than Wraparound, Ice Wall, and Paper Wall, and Eli costs influence. It obviously won't be splashed, but for Weyland it's perfectly fine and worth considering. — AwkwardPizza 9 May 2015
I'm not sure you need to forget that Ice Wall exists to include it. In Blue Sun, the strongest Weyland identity at the moment, it's an easy include over Ice Wall. The extra tax is great, the extra credit spent not a big deal for a rich identity, and Blue Sun has the unique ability to reposition it over HQ even if it starts elsewhere. Definitely an upgrade over Ice Wall. — phette23 25 May 2015