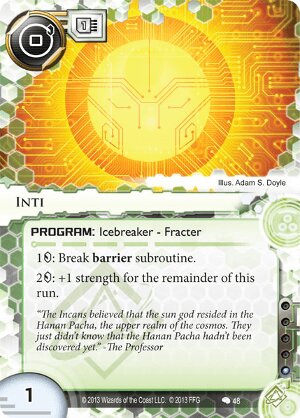 2credit: +1 strength for the remainder of this run.

"The Incans believed that the sun god resided in the Haman Pacha, the upper realm of the cosmos. They just didn't know that the Haman Pacha hadn't been discovered yet." -The Professor
Illustrated by Adam S. Doyle
Decklists with this card

Inti! Your time has finally come!

With popularity of various NBN decks, all using such formidable barriers as Wraparound or Resistor, influence nerf to Eli 1.0 and Cerberus "Lady" H1, Inti has its time to shine. Inti is cheap, fast and looks like a cute little owl.

I wouldn't risk using it as my sole barrier breaker, because paying 21 creds for Curtain Wall or 8 for Eli is still very silly thing to do, but it will save you Lady token on cheap barriers or can be a part of larger Chameleon deck. And if you want to import Faust, inti is here to help.

This little guy shows, that in right meta, there is a place for every card.

No matter how you look at it, Inti is almost never a good choice. Sure, the strength buff, like Gordian Blade's, lasts for the entirety of the run, and yes, it's free to install. But 2 for a single strength is just too much, more often than not, and there are much better options now, just as there were then.

Corroder is, or was, the obvious alternative, and now Shapers have the in-faction option of Cerberus "Lady" H1, which is excellent with their penchant for recursion via either Aesop's Pawnshop plus Clone Chip, Test Run, or simply Scavenge. What is worst of all is, as soon as this hits the mat, the corp will immediately play to its faults.

Instead of stacking barriers, they will spread simply spread them out. Or, for example, against advanceable-ice Weyland, especially one with Constellation Protocol, the corp will simply stack all their advancement tokens on a single barrier, negating much of the benefit of the "...for the remainder of this run" effect. And big barrier ice like Curtain Wall, Hadrian's Wall, Heimdall 1.0, or Heimdall 2.0 will likely bankrupt any runner that tries to break through them with this.

Sure, you could lower the strength of ice you encounter instead of raising Inti's (e.g. via Datasucker), but then why are you playing Inti? Snowball is the way to go then, with its only real disadvantage over Inti being the hefty installation cost. But Shapers have all the tools in the world to negate that: Personal Workshop, Sahasrara, and Cybsoft MacroDrive just to name a few.

As it is, I can't see this being used in any serious deck. But I'd love to be proven wrong, and maybe FFG will one day come out with a card that solves Inti's crippling buff-cost. However, until then, I'll happily avoid using it in my decks, or just using it as a proxy for other, useful cards.

(The Universe of Tomorrow era)
Pikeman 272
There is only one place where Inti is justified: in AI-focused decks (Faust, Eater, Chameleon although it's technically not AI) as anti-Wraparound tech. — tiedyedvortex 18 Sep 2015
Depends what you mean by "serious". There is space in some early access toolboxy type decks and, as mentioned, AI focused decks for wailing on Wraparound. It can also be Aesop/Scharazdze nonsense food, but now we're getting even further from the "serious" you were referring to. — Cliquil 18 Sep 2015
It is sometimes used in Exile decks with Aesop/Scheherazade, as backup for Lady. Worst case it's trashed for cash, best case it conserves Lady counters. — EnderA 19 Sep 2015
I run it in my exile chess deck and it's fantastic. It costs nothing to install, it gets through Ice Wall and Wraparound, with datasucker you can get through other things if you need to. When you don't need it anymore just scavenge it and get something else out. — Yziel 20 Sep 2015
Inti is the best shitty card of the runner card pool. It's everything but a good main fracter, but it's a pretty good auxiliary fracter if you run a Shaper deck without Corroder. Ever feel that pain when installing Cerberus Lady for a Wraparound or an Ice Wall, and then blowing your tokens away on them ? For that single reason Inti deserves consideration. Also descent against Spiderweb if you also use Datasucker or Net-ready Eyes. — Lupus Yonderboi 6 Oct 2015