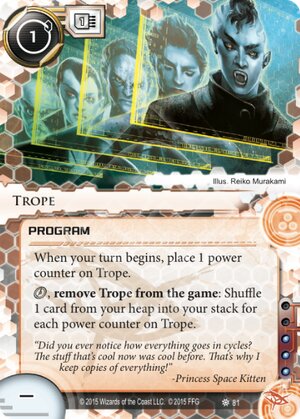 When your turn begins, place 1 power counter on Trope.

click, remove Trope from the game: Shuffle 1 card from your heap into your stack for each power counter on Trope.

"Did you ever notice how everything goes in cycles? The stuff that's cool now was cool before. That's why I keep copy of everything!" -Princess Space Kitten
Illustrated by Reiko Murakami
Decklists with this card

I'm currently having a lot of fun with this in fast aggressive Anarch decks, or any Anarch deck that can eventually risk "running out of steam".

The comparison with Levy AR Lab Access is obviously apt, but the most important distinction here is the number of cards shuffled back in. It's unlikely that Trope will get you as much back as LARLA unless it's been cooking on the grill for 30+ turns, but this can actually be a massive advantage if you time it correctly. Unless you're literally just trying to get more card-fodder for Faust, chances are that you're looking for specific cards in your heap to play again. A well-timed Trope will ensure that your "new" deck will contain ONLY these cards, saving you the hassle of having to cycle through dead draws all over again.

There exists a strong temptation to view Trope as the Anarch Levy AR Lab Access. Don't. These cards do both share the same design space of allowing cards from the heap to return to R&D, which makes them similar in the same sense that a blunderbuss is similar to a modern sniper rifle.

Trope allows the runner to run bold and recklessly using their most powerful cards right off the bat. Thinking in orange, the top targets can probably look like:
Account Siphon
Blackmail
DDoS
Demolition Run
Legwork
The Maker's Eye
Any econ card
*Your suggestion in comments!

Let's just think about the first three. Imagine a Valencia Estevez: The Angel of Cayambe deck with 6+ copies of Blackmail and DDoS. With 6+ copies, there is no reason to wait, just pop them as soon as you draw them to hit the corp early and often. Think about Reina Roja: Freedom Fighter with 6+ Account Siphons, will she ever stop? will the corp ever have more than 3 credits? probably not. In theory, '6+' could become a really big number, but these high-impact events should probably end the game before then, and I don't really care about the theoretical; 6 is already a lot.

But Trope is better than just having extra copies in your deck. You are very specifically selecting your best cards for your current match up, leaving your stack supercharged with the best high-impact cards in the mid and late game. You can dig for those 3 copies of Blackmail in a 30 card stack after you've already used 2.

Trope does not do what Levy does, and it is a poor replacement in decks looking to bring back cards en mass. Faust Noise and PPVP Kate are the two most popular runners at the moment, and they can both stand to gain more from Levy than Trope, since they both need lots of cards, more than specific cards.

In conclusion, Trope and Levy are different cards that do different things, and should be though of as such. Focus on Trope's real strength and what it can do, and you will see it shine from the background while Account Siphon, Blackmail, and DDoS take center stage.

(Data and Destiny era)
bubbathegoat 597
Clone Chip and Parasite now that they are part of the NAPD's most wanted. — Goldstep 31 Dec 2015
1

I see this as an Anarch's replacement for Levy (especially MaxX). For four less credits, it has a similar effect.

I will compare it to Levy AR Lab Access.

Better believe this is going into most of my Anarch decks. Noise will LOVE this.

(Old Hollywood era)
LynxMegaCorp 1339
I think Noise is absolutely the strongest contender for Trope. He just wants to install whatever viruses he draws into and often doesn't care much about the order. With Trope, you are able to keep the gravy train rolling. I think Trope will greatly increase the number of turns it takes to get to selling off your Wyldside and Adjusted Chronotype to Aesop. — FarCryFromHuman 12 Aug 2015
I dont think it's going to be much use in Maxx due to the fact that two thirds of the cards you bring back will be thrown back in the trash again, so its a bit wasteful of a slow to gather resource (1 per turn power counters) - Levy still seems the best bet for that particular deck. Every other anarch will likely be licking their lips in anticipation though if they can find the extra memory unit. — lomar4976 12 Aug 2015
You are both absolutely correct. I suppose the only plus for max is the influence it saves. As an Anarch, with the simple inclusion of Djinn, this can fit! (Many anarchs will run virus programs anyway, right?) It also holds Clot, Imp... — LynxMegaCorp 12 Aug 2015
I would consider running it in MaxX, probably as a one-of, for recurring 4-5 pieces of economy in the late game and then Injecting into them, for instance. Not sure it's strong enough though. — ouroborosglyx 12 Aug 2015
Shame that you can't Djinn it up for maximum effect, but there's other ways around that. — HilariousCow 12 Sep 2015
1

Now that Levy AR Lab Access is on the restricted list, the pressure for runners to consider this a LARLA replacement is greater than before. The restricted list did not remove the risk of corps like Pālanā Foods: Sustainable Growth trying to get rid of the runner's stack. The choice between LARLA and Magnum Opus or Clone Chip is one that I do not like to make, and this, at least, makes it a bit easier.