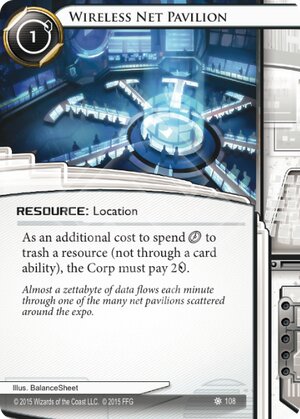 As an additional cost to take the basic action to trash 1 resource, the Corp must pay 2credit.

Almost a zettabyte of data flows each minute through one of the many net pavilions scattered around the expo.
Illustrated by BalanceSheet
Decklists with this card

More broken than is immediately obvious. Let's you float tags and keep your resources in tact.

Freelancer is the obvious hard counter, but there is also #The All-Seeing I, and Corporate Town

(The Universe of Tomorrow era)
Kikai 863
Either I'm missing something or your math is terribly wrong. With 2 Wireless Net Pavilion installed, trashing a ressource costs 1 Click + 6 Credits. And this + Paparazzi really doesn't sound like it'd be a safe way to prevent a double Schorched. 3 Clicks + 12 Credits is an expensive way to win the game, but if it's gonna give me the win, I'll find a way to pay it. — Akanthinos 28 Sep 2015
Ah! I see it now. Still wouldn't see it as more than a (rather big) tempo loss for the corp, and considering the arrival of Corporate Town in the meta, I wouldn't exactly rely on this. — Akanthinos 28 Sep 2015
01.01.2016 — piotrsmu 31 Dec 2015
01.01.2016 wireless net pavilion become unique — piotrsmu 31 Dec 2015
whew, thank god it is unique now — quailman2101 31 Dec 2015
Did they add that it's unique now or was it supposed to be like that all along? — ChairmanHiro 7 Jan 2016
I think it was converted to unique after seeing how powerful it was to stack them. The flavour text of the card notes more than one pavilion at the expo. Glad it's unique. — Mechanoise 8 Jan 2016
Yeah, but logically it's hard to be in more then one net pavilion at once. It was play tested as unique and changed late in the process (according to Damon in his interview on The Winning Agenda podcast). — BoomFrog 13 Jan 2016
3

This card was featured in the 2015 Worlds winning deck. The package was exploiting Data Leak Reversal supported by Wireless Net Pavilion, Fall Guy and Paparazzi. With multiple copies of Wireless Net Pavilion out, it costs the Corp 8 resources to remove a single Fall Guy! In the meantime the Runner keeps tapping with Data Leak Reversal and uses Account Siphon when required to prevent the Corp being able to trash the whole set-up.

The package was so good that FFG made the card unique in December 2015. This now means that the maximum cost to trash a resource is 4 credits. In turn, this increases the interaction of the game with the Runner needing to keep the Corp's credits much lower by forcing rezzes.

(Fear the Masses era)
Hayati 51
I think its VERY important to mention that the package was exploited specifically out of Valencia due to her bad publicity. The All-Seeing Eye would make short work of this strategy, but her ability meant the corp needed to play two of them just to get anywhere. While not impossible, it certainly wasn't viable when you're losing 4+ cards from R&D each turn. — LynxMegaCorp 1 Jul 2016