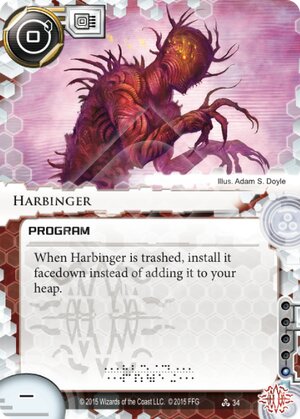 interrupt → When this program would be trashed, turn it facedown instead of adding it to your heap. (It is still considered trashed.)

I AM BECOME DEATH
Illustrated by Adam S. Doyle
Decklists with this card

With the release of Reaver, Harbinger now has a lot more utility outside of Apex decks. Any deck running Aesop's Pawnshop and Reaver should consider splashing another 3 influence to slot 3 Harbingers.

Installing 1 Harbinger for a click gives the runner 6 credits and 2 card draws over the next 2 turns once the engine is set up. Being a program, Harbinger also fires Technical Writer for an additional 1-3 credits to be collected when required. 1 click for 6-9 credits and 2 cards is pretty nuts, and Hayley goes one step further by allowing you to install 2 Harbingers in 1 click. That's 12-18 credits and 4 cards being drawn for a click (over 4 turns though). Using a Clone Chip to bring Harbinger back (making sure to fire the Clone Chip on the corps turn for that extra draw from Reaver) just makes sure Aesop is never out of stock.

On top of this, whilst Harbinger is waiting to be sold by Aesop, he acts as a great target if the corp forces the runner to trash an installed card (like Power shutdown).

7 influence for Reaver for 3 Harbingers out of Shaper is a steep ask, and you if you have to import Aesops too the total influence hits 13 which is something only Sunny would seriously consider.

So the obvious use of this card is to feed Apex's cards like Endless Hunger and Heartbeat. But it has a few other uses as well.

For Apex, it's probably his best defense against Power Shutdown. (Which would otherwise take a heavy toll on his Endless Hungers)

But outside of Apex, it can serve a different purpose - when comboed with Aesop's Pawnshop, it's worth 3. Twice. Cards that you can play for 0, and that give you equivalent returns to Lucky Find are pretty rare. (Without being a double, and for half the influence, to boot!) You can bump it up even further with Wasteland.

The idea behind Harbinger is that it can be trashed twice by cards that need installed card trashing to fuel their abilities, like Endless Hunger: the first time you turn it facedown, the second time it goes to your heap.

You also want to make sure you have a Harbinger out before you run with Endless Hunger on the board, if you're anticipating an X=0 Power Shutdown.

(Data and Destiny era)
rainyghost 3
Does Harbinger work with Faust? This is the same sort of thing that Tri-maf Contact deals with, and in that case, if you trash the Tri-maf from your hand then you don't take the damage since it isn't in play beforehand. Precedent says that the same thing would happen here: Harbinger gets trashed from grip and goes straight to heap. — ReploidArmada 10 Nov 2015
Harbinger does NOT work with Faust. Unless the card effect necessitates it (like I've Had Worse) cards in players' hands are not active. — tiedyedvortex 10 Nov 2015
Sorry for the confusion on Faust. I've updated my review to specify "installed card trashing" and not mention Faust. — rainyghost 16 Nov 2015
Is it still a 0 cost card for power shutdown when its face down? — sodapopinski 20 Jun 2016
No, it would no longer be eligible as a target for Power Shutdown since it is neither a program nor hardware when facedown. A flipped Harbinger will not protect your Endless Hunger. — Nidhogg 29 Jun 2016

So, bear with me while I Jank God out for a minute. If you have Aesops pawnshop in play, plus a couple Reavers, and an Assimilator, you can play and trash a faceup Harbinger, bringing it back into play facedown. Then use two clicks to trigger assimilator, flipping it back faceup, and simply repeat the process over again ad infinitum. So in theory, once set up, you could be pulling 3 credits and 2-3 card draws for the price of two clicks anytime you want.