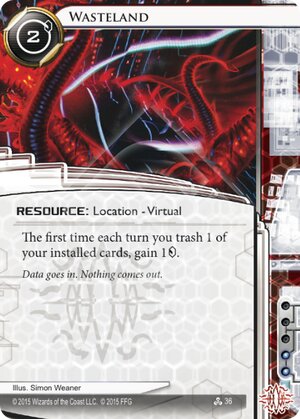 The first time each turn you trash 1 of your installed cards, gain 1credit.

Data goes in. Nothing comes out.
Illustrated by Simon Weaner
Decklists with this card

For Apex himself, it's a pretty decent drip-income, as long as you're running often enough to trigger it around once a turn. It's also a pretty solid splash for any deck that is planning on using Aesop's Pawnshop fairly often. (Looking at you, Noise)

It also could do well when paired with a lot of cards that trash themselves. (Translation: put it in your Geist decks.) Heck, with enough of them, Fall Guy turns into a better Hedge Fund!

Fun fact - since it triggers once per turn, you can fire it during the corp's turn as well as the runner's.

(Data and Destiny era)
Bwob 503
If one were to have all three copies installed, would one earn 3 credits of the first trash? Or just one credit but can be done three times? Or no stacking at all? — lunchmoney 22 Aug 2016
It's not unique so you can have all 3, and they all will fire. — nesou2 3 Sep 2016
Notably, it's not a replacement effect, either. I.E. Security Testing isn't unique but is a replacement effect, so more than one ST on a single server is redundant. — EnderA 18 Nov 2016