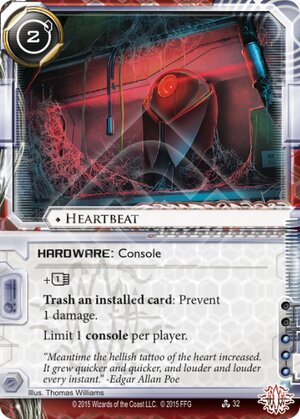 "Meantime the hellish tattoo of the heart increased. It grew quicker and quicker, and louder and louder every instant." -Edgar Allan Poe
Illustrated by Thomas Williams
Decklists with this card

It is hard to imagine being flatlined while you have this console in play. As a typical game goes on the Runner side of the table tends to sprawl wildly, with cheap resources, programs and hardware proliferating endlessly. Going on the anecdotal evidence of my own games I'd say that on average the runner has upwards of 8 cards in play throughout most of the game. If we accept that as a reasonable estimate (and feel free to substitute your own if your experience is different), it would take north of 14 damage to flatline such a runner.

Further, the prevention isn't done as an all or nothing decision. If you have just a few expendable cards in prey Harbinger or Fall Guy for example, you can use those and let the rest hit your hand. If your hand is solid gold you can blow up some connections that have outlived their usefulness. You get to pick and choose.

Beyond this, its important to note that you can block brain damage as easily as anything else. Stumble into a triple advanced Cerebral Overwriter and walk out having lost 3 cards, rather than half your hand for the rest of the game.

So, the upside is there. What about the downside?

Well, if you use this as your console, you are paying 3 influence, unless you are playing Apex, and you give up all of the other benefits that your console could be providing you with, in the name of safety. Desperado 's 2-3 credits per turn will not be yours. Grimoire 's virus counters will not assist you, nor will you benefit from its larger memory bonus. If you play #Heartbeat you are forgoing consoles that help you win and picking instead one that helps you not lose.

In all honesty, it will probably be worth it to some runners. There are runners who have their economy set up to the point that they don't really need the benefits from a console. Coincidentally, they tend to have a lot of cards in play they'd LOVE to sac rather than lose the game. How many Big Rig Shapers have achieved R&D lock and plowed into a pair of Snare! for the surprise loss?

An interesting console. Not for everyone, but I think it'll see some play.

Great damage protection in Apex, but keep in mind that using Apocalypse will turn Heartbeat facedown, making you vulnerable to damage such as Scorched Earth immediately afterwards, assuming the Corp can land a tag or you're floating tags.