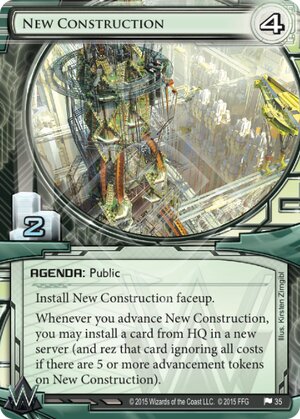 Whenever you advance New Construction, you may install a card from HQ in a new server (and rez that card ignoring all costs if there are 5 or more advancement tokens on New Construction).

Illustrated by Kirsten Zirngibl
Decklists with this card

New Construction is one of two available "public" 4/2 agendas available to Weyland. The other, Oaktown Renovation, is arguably the best Weyland card released since Blue Sun: Powering the Future. Both agendas fulfill similar roles (preventing tempo loss while trying to score) and both have similar weaknesses (must be played face up, 4 advancements to score). So, how does New Construction stack up? Let's take a look.

First, instead of spending money to advance, with Oaktown you actual make money. This means you can potentially score from a single credit and be close to Hedge Fund range by the end of your next turn. More importantly though this allows you a bit of wiggle room for rezzing ice. You can throw Oaktown down behind ice you can't quite afford and advance into rez range. This is an enormous boon for Rush decks that want to score out fast behind early ICE without a stable economy. However, Oaktown's benefit is so universal that it sees play in a wide variety of deck archetypes.

With New Construction on the other hand, you are still losing money while advancing, but you are instead saving clicks in the form of installing assets and upgrades. (Important side note for new players: installing cards in a server is not the same as installing them protecting a server, therefor you cannot use this agenda to install ICE in a new server.) The difficulty here is that you need a lot more money up front to comfortably score next turn and still rez ICE in response to Runner threats. Also, unless you reach a fifth advancement on New Construction, you still need money to rez these assets and upgrades. So, ideally you need a rather hefty amount of cash to defend, score and capitalize on New Construction's unique benefit.

This leaves several popular Weyland archetypes, such as Rush or SeaScorch decks, in the position of not being able to utilize New Construction. But that's okay -- you don't need it there anyway. Instead, this agenda opens up opportunities in relatively unexplored territory for Weyland: horizontal and asset spam decks.

New Construction can be used in a number of potentially threatening ways. With rezzed Turtlebacks on the board, advancing allows you to threaten a 2 point score while also building an economic threat and making money at the same time. Advance installing a couple Public Support assets puts the runner of a clock, pressuring them to trash high cost assets or give you the two points you were threatening to score anyway. The newly released Mumbad Construction Co. can be installed and allow you to FA an agenda next turn if it's.not dealt with, creating a win win scenario for the Corp. Or you could be really ballsy and advance install a Project Atlas face down and score out next turn (although that leaves New Construction vulnerable.)

Enter Gagarin Deep Space: Expanding the Horizon, an ID that has been teetering just on the edge of being a force to be reckoned with. Gagarin's self protecting remote servers, combined with the tempo advantage offered by New Construction and a large amount of high priority asset targets can make for a very threatening deck. New releases such as Dedication Ceremony, Mumbai Temple and Museum of History create even more possibilities.

Oaktown Renovation is probably still a better card for the fact that it is a more universally beneficial ability, but in the right deck New Construction has a lot of potential.

Edit: it should also be noted that you must have installable cards in hand to utilize New Construction ability, which increases the variance involved, whereas with Oaktown all you need is a single credit. This also means that using New Construction leaves you with less cards to pad out HQ, so be wary of using it when you have another agenda in hand

(Business First era)
WayneMcPain 413
Corporate Town without burning your agendas, anyone? SanSan for free? Living the dream:) — toiry 13 Mar 2016
I don't really think the "rez for free" ability will be viable without Dedication Ceremony. The thing is, no realistic amount of free assets or credits is worth the Runner stealing 2 points and by the time you advance to that threshold, you are playing a very risky game. Dedication helps a lot, but even so, with New Construction in particular that means having a 3 cards combo in hand (New Construction, Dedication, SanSan), protecting it for a turn, spending next turn use ability to install/rez SanSan and hopefully have ice in hand to protect it too, whilst also having enough money to rez said ice. And so now you have a rezzed SanSan protected by a single ice and only have 2 cards left in HQ. Maybe you can FA an agenda out and maybe not. If the agenda was in hand last turn, then you are leaving yourself open to a Legwork score. There is just so much combo wombo and risk involved even with Dedication Ceremony. Free rez is cool, but I think realistically the only reason you would play this card is to spam assets, not set up FA power plays. — WayneMcPain 14 Mar 2016
SanSan City Grid doesn't help this card come online faster. The 'free rez' specifically references advancement counters á la Underway/Oaktown/Hollywood Renovation. You can, however, try and abuse Blue Sun with it, constantly recycling some part of a glacier, such as an Off The Grid, or even a Mumbad Construction Co. with some way of utilising the free advancement counter (Fire Wall, Ice Wall, or even something cheesey like a GRNDL Refinery) — FatalSource 17 Mar 2016