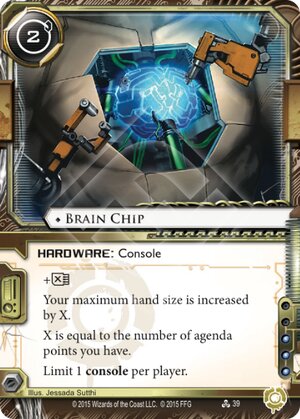 Your maximum hand size is increased by X.

X is equal to the number of agenda points you have.

This is probably one of my favourite consoles.

Most consoles you want to have out as early as possible because they give , , on runs, virus tokens or even card draw.

This means you would run 2x or even 3x a console which can be installed only once.

The fact that Brain Chip is essentially a late game console makes it such a nice one of in all those decks that don't rely on an early console with the above features, thus saving deck slots and possibly some influence.