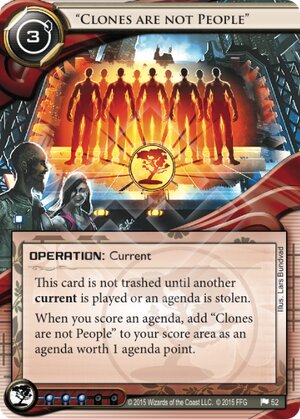 "Clones are not People" 3[credit]

When you score an agenda, add "Clones are not People" to your score area as an agenda worth 1 agenda point.

Illustrated by Lars Bundvad
Decklists with this card

There are two ways to play this card.

Way One is the safe way. You set your board up so you have an extra click on the turn you plan to score an agenda: maybe you install-advance-advance a 4/2, for example. If it survives the night, then next turn you play Clones Are Not People, advance-advance and score, If you do this, you're spending a card, a click, and 3 to get yourself an agenda point. This is pretty reasonable, but probably not worth 3 influence out-of-faction.

Way Two is the Jinteki way. This is where you play CANP, and threaten to score next turn. The ideal play would be: click one CANP, clicks two and three Mushin No Shin.

This is a terrifying move. Mushin No Shin is already a scary card, since it threatens a Junebug flatline or Cerebral Overwriter, weighed against the possibility of them scoring The Future Perfect.

Most runners, when presented with that dilemma, will not run that card unless the corp is already at 4 points and threatening a win. You can always come back from an agenda deficit, but you can't come back from flatline,

But when you raise the stakes with CANP, you are asking them: are you willing to give away FOUR points? Four is a lot more than three. Here, I expect most runners would take the risk and go for it.

Of course, raising the stakes means you have more to lose. If you WERE trying to score an agenda, and the runner snags it, not only do you lose the agenda, but CANP dies as well.

But if you feel like wagering the outcome of an entire game on a single decision, Clones Are Not People + Mushin No Shin is a fun way to go.

(Democracy and Dogma era)
tiedyedvortex 4729
If you Mushin out a trap and keep a Clone Retirement in hand it becomes a Xanatos Gambit. — Zakalwe 1 Apr 2016
Even worse if you use the Medical identity where you only need 6 points to win and then use some Clone Retirements or Medical Breakthroughs maybe? — The Broken Meeple 6 Apr 2016
If you really want to play games with the runner, after CANP is out and you mushin out your trap/ agenda and they decid not to take the risk, play an offer the can't refuse to up the stakes further if they take it they really risk death if not they are at game point if you score it, assuming you are currently at 0 points — Makehate2me 30 Apr 2016
Offer you can't refuse can only force the runner to run on centrals. :(. Bullfrog maybe? — Starwarstsg 4 May 2016
The Mushin/CANP combo is quite interessting with Global Food Iniative: You create a situation where you can score 4 points, but only loose two if the runner steals the Agenda. — Yhtill 16 May 2016
You could always play CANP on the turn you're going to score the agenda, unless its a Vanity Project. So Mushin + CANP play doesn't really make sense if it was an agenda so its most likely a trap. Of course, if both players know this, it becomes another mind game that can dissuade the runner from running the card or persuade them to do so. — heppu 5 Apr 2017
1

While expensive in influence "Clones are not people" can be useful in Jemison Astronautics decks. If you score a Hostile Takeover or even a Standoff with it installed you get one agenda point which doesn't go away when you forfeit the agenda you scored it with.

(Free Mars era)
Silv 347
You are entirely correct. I have used it in that fashion. It gives Jemison more points to gain in the late game, and those really add up. — Severijn 22 Aug 2018