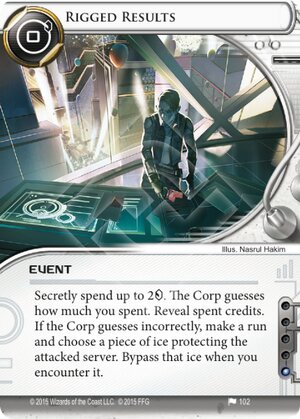 Secretly spend up to 2credit. The Corp guesses how much you spent. Reveal spent credits. If the Corp guessed incorrectly, choose a piece of ice protecting a server and run that server. The first time during this run you encounter the chosen ice, bypass it.

TL;DR: I like it, but I wouldn't say it's competitive.

Rigged Results is a flexible one-time bypass effect with the drawback of chance. Seeing as bypass is a strong runner ability (not as infuriatingly powerful as ice trashing, but possibly as good as derezzing), and that bypass effects are pretty rare, Rigged Results deserves a good look-over.

You would most likely use this in similar situations to an Inside Job: They've installed a card in their scoring server thinking you can't get in because you either lack the right breaker or don't have the creds. Even with the right breaker, having a chance to get past a Tollbooth for <2 instead of 7+ is pretty good.

This use is effective against traditional scoring corps, but not as much against FA because they often don't need their remote. Against FA you could combine this with HQI/Nerve Agent and run on HQ when they thought you couldn't get in, but then you're stacking it with a chance of not accessing an agenda.

I actually really like this card on paper. I don't think the cost is unreasonable for what you're getting, and it encourages a little player interaction. Unfortunately, many people who play Netrunner like the guaranteed strategies over leaving it up to chance, so this card will probably not be at the top tables at Worlds anytime soon. On top of the chance factor, costing an influence means it's competing against utility cards like Film Critic or Employee Strike and against stronger effects like Parasite.

(Fear the Masses era)
PureFlight 1038
There is something that people don't seem to mention when comparing to Inside Job, namely that Inside Job bypasses the outermost *rezzed* ICE. So if you inside job a server with two unrezzed ICE, you will encounter one only if the Corp rezzes both. Which means that it will generally cost them a lot of money (and then you can run elsewhere freely); or they won't be able to rez nasty, expensive ICE; or if the first ICE they rez is cheap (e.g., Vanilla) you can jack out before you encounter what you expect to be a dangerous ICE (e.g., Brainstorm, Janus). — tantale 7 Jul 2016
Pop this in to Apex and pray for the corp to guess wrong on your Apocalypse run. It's fun! — tendermovement 26 Jul 2016
1

Why this is not Criminal I will never ever understand. Criminals were supposedly the faction that was going to bypass ices. Yet still they do this neutral with influence. Even thematically, this seems shady as criminal.

(23 Seconds era)
Windave 276
Game mechanics are not meant to stay in faction for the sole purpose of staying in faction. Deckbuilding design shouldn't be restricted purely out of respect for a faction's flavour. — Akanthinos 30 Jul 2016
Should still be geared towards. Could have been 1 influence Criminal, at least. — LynxMegaCorp 30 Jul 2016
Seems to me that being able to put 6 Inside Jobs (more or less) in any deck, without spending a single influence point, would be broken. — Akanthinos 31 Jul 2016
Oh, because being able to trash 9 Ice without spending influence (cutlery) is okay. ;) — LynxMegaCorp 31 Jul 2016
Only thing is it's not healthy to remedy a broken situation by making something else equally broken. — Tirranek 31 Jul 2016
And besides, there's no real broken situation here, as I don't think full cutlery is even a thing. — Akanthinos 31 Jul 2016
Cutlery is part of why a whole archetype had to have half its influence cut off. — LynxMegaCorp 1 Aug 2016
And yet 2/2/1 ain't full cutlery. The point stands. If Inside Job was a "Limit 6 per deck", it would be, by far, the best and most used "Limit 6 per deck". — Akanthinos 2 Aug 2016
That's nearly 6 cutlery that won't cost as much and TRASH ice instead of bypassing. Rigged Results doesn't even guarantee the bypass. — LynxMegaCorp 3 Aug 2016
That's 5 cutlery that, while not costing as much, requires to be used in tandem with a breaker and must target a specific type of ICE. Spooned is deadweight against a barrier. Inside Job (or Rigged Result) isn't. — Akanthinos 3 Aug 2016