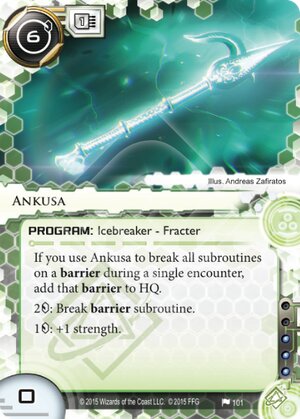 Whenever this program fully breaks a barrier, add that barrier to HQ.

A fundamental relationship in the mathematics of Netrunner is the "rez-to-break" relationship. Simply put, how much does it cost the runner to break a piece of ice once with a decent breaker, compared to the cost the corp pays to rez it?

For the vast majority of ice and breakers, it costs the corp more to rez it than it will cost the runner to break it once. For example: a Wall of Static costs 3 to rez, but only 2 to break with Corroder.

This leads to a dynamic that experienced players are well familiar with. Forcing the corp to rez ice is good for the runner; you are coming out ahead on that interaction. Once a piece of ice is rezzed, though, you don't want to break it any more times than you have to, because it's just a straight loss for you, leading to multi-access, bypass, and ice destruction tactics.

Ankusa flips that script. When Ankusa is your fracter, every barrier must be rezzed every single time that they want to protect their server. More than that, actually: they have to rez it AND reinstall it, costing clicks and probably credits if they had other ice on the server. Bonus points if it had advancement counters on it.

But at the same time, Ankusa's stats are pretty horrible, compared to Corroder. It's going to cost you at least 1 extra (against, say, a Wraparound or a Vanilla), will typically cost you 3 extra (against any single-sub barrier bigger than a Himitsu-Bako), and an Ashigaru just makes you cry. This (along with the 6 install cost) means that you are paying a substantial cost for the benefit of taxing the corp. You can reduce this strain with strength-boosters like Dinosaurus or Net-Ready Eyes, but you can't get around the 2/sub cost with e3 Feedback Implants because you have to break the subs with Ankusa, not with hardware.

So Ankusa puts enormous economic strain on both sides, and the winner of this money-fight will win the game. If the runner has money and the corp doesn't, the runner will just bounce all of the corps barriers, leaving their servers porous. Remember--if you bounce a piece of ice on click 1, that leaves you three clicks to pound that server before the corp can put it back. Medium enjoys that interaction on R&D.

On the other hand, if the runner can't manage to get enough money to push through the barriers in the first place, then the game is lost. And that leads me to the next point--Ankusa is absolutely a big-rig card. You need to have fat stacks to play this card. Fat. Stacks. Magnum Opus is a start. Aesop's Pawnshop builds might generate enough money to fuel this. Whatever it takes.

The other flaw is that Ankusa is only a fracter, not an AI. A Magnet is basically identical to Wall of Static but can't be bounced with Ankusa. You can try to patch this flaw with Paintbrush, of course. But the fact that the ice has to be rezzed means that you have to break it twice: right after they rez it, and again after you've painted it barrier. This halves the efficiency of the bounce, to say nothing of the 2 MU cost of Paintbrush (which gets problematic if you're trying to run it with Magnum Opus as well).

In summary: it's a big-ass breaker that needs a monster economy behind it, but once it gets rolling it can really give a barrier-focused corp hell. With those caveats, I think it falls solidly in the "jank" category, but it is some grade-A jank that's well worth trying out at a casual night.

(Fear the Masses era)
tiedyedvortex 4712
Would Ankusa be notably better with support? Obviously Multithreader helps, as would Toolbox/Cyberfeeder. Or what about making up for the low strength with Ice Carver/Scrubbed/Null/Bishop? Parasite too, but that's not a good use of it. Bishop only w/ Pawn because jank. — PureFlight 14 Jul 2016
I don't think Ankusa benefits from Multithreader support more than other breakers do. It's certainly viable but you'd get the same or similar benefit from using Multithreader with Corroder or something. — tiedyedvortex 19 Jul 2016
4

I love this garbage card. It's hilariously inefficient to break just about anything (hello, 8 for Spiderweb), but man, if you are seriously prepared to use this, it is an incredible tempo crusher for the Corp. Obviously, you need a LOT of money to keep this thing viable, what with zero strength and 2for breaking each subroutine. And thanks to the wording on the card, you can't even use e3 Feedback Implants to reduce the cost on multi-sub ice (please correct me if I'm wrong)!

What's changed since this card came out? Şifr. If you keep hammering a server and throwing back barriers, you aren't going to worry too much about the "once per turn" rule on OP Suitcase. This helps with costs fairly significantly! It probably beats out Dinosaurus as the console of choice for this breaker, doubly since it helps with your other breakers and doesn't rely on which you install first. Another minor synergy is with Network Exchange, taxing extra every time they put it back in a deep server.

Obviously it's not going to help against all the rude code gates out there, but as a Shaper, you have Gordo Swordo, so don't sweat those too much (good luck with sentries, as usual). For maximum jank, get out the Paintbrush and Bob Ross that DNA Tracker outta your way!

This card has enormous drawbacks, but if you're already running Şifr and have cash and no influence to spare, it might be worth a second thought!

Trashing ices is an Anarch thing, derezzing them is a Criminal thing, sending them back to HQ is a Shaper thing. For doing these, Anarchs have wonderful cards, Criminals have neat ones, Shapers have False Echo. This last one only works on unrezzed ices, so it needs some out-of-faction support to work, like DDoS or Crescentus and that's why Shapers hardly bother to use this mechanics of their own.

Here comes Ankusa, a new way to fit this mechanics, with a few things to consider. First it comes embedded in a fracter, only working on barrier, while Shapers have some way to deal with that (Tinkering and Paintbrush). But out of these shenanigans, I suppose every dedicated Kit sparked the same idea seeing this card : "take back your barrier standing after that Enigma and dare to install it again, I'll handle it with my powerful decoder next time." No jank, can it work ?

Sadly, it comes embedded in an icebreaker with numbers that are somewhere between Aurora-bad and Leviathan-bad.

Want to deal with Wraparound ? Pay 6 to install, 2 to break. Does it matter to never see it later again, when a single Inti allow you to handle it 8 times a game for the same cost (including installation) ?

Eli 1.0 ? 6 to install, 8 (eight) to break, and a Corp that will eventually install it back since it will cost less to him than to you. Talk about econ denial. With these 12 you can install 2 Cerberus "Lady" H1 and use them to pass Eli 6 times.

This Oversighted Curtain Wall played by a Blue Sun deck ? Do you need to send it back in hand if you can afford to break and trash it ? Do I need to do the math ? (I hope I don't, I don't know how to count that much).

Shapers are not supposed to be good at breaking barrier, but it happens that they are. So I totally understand that they don't need another good one or even "just-decent-but-with-neat-messing-up-effect." But still, the numbers on Ankusa doesn't even allow jank-lover to dream...

Well, maybe someone should give it a try before we bury Ankusa, just in case I'm plain wrong. But I won't be that guy.

(Fear the Masses era)
Lupus Yonderboi 245
I've seen first hand how this works out of Nasir with Surfer. Pretty hard to create scoring windows. It's definitely not your main fracter but it can cook on Personal Workshop for a few turns and then come out to dismantle a server. — FarCryFromHuman 18 Jun 2016
I'd like to see that. Kudos for that guys who gives back a few hope for my inner-jank-lover. — Lupus Yonderboi 18 Jun 2016
Running CT with Dinosaurus 3x Multithreader and Net-Ready Eyes is something I'm looking forward to trying. Maybe even with a Study Guide to get extra value from the Multithreaders. Sure that's a lot of pieces but you don't have to set them all up before running. Dounds like fun :3 — Yziel 19 Jun 2016
@Yziel : so if your plan is to install Ankusa on Dinosaurus, can we call this archetype Ankylosaurus ? It's for my inner dino-fan. — Lupus Yonderboi 19 Jun 2016
YES! This needs to be a thing! :D — Yziel 19 Jun 2016
Would Nasir even be able to afford to break the barrier after his ID wipes his credit pool? — taisun93 19 Jun 2016
This deck was all recurring credits and ghost runner so yeah, disgustingly, it could. — FarCryFromHuman 21 Jun 2016
2

By now, Ankusa now has support in terms of:

Which means that Ankusa will start a money-fight that the runner will eventually win 99% of the time.

The runner will most of the times win the long game. Ankusa's main problem is the tempo hit that let's the corp win before you're getting there. Comboing it with Dedicated Processor and Pelangi doesn't exactly make it faster. But yes, in the long run, this is the ultimate denying tool that completely devalues ICE as a card type. In the very, very long run.

Just wanted to mention that this breaks Kakugo without losing a card because it returns it to HQ before passing. Could be useful against Jinteki grinder decks (if you want to pay 6 to install and then 3 to break).

It also forces the Corp to use Border Control immediately, or else not be able to use it that run. I've found it useful as a late-game backup fracter for that reason (in decks that normally rely on, say, Engolo for the bulk of their icebreaking).