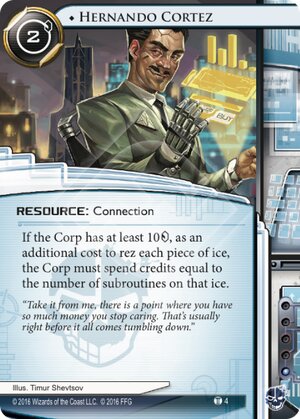 If the Corp has at least 10credit, as an additional cost to rez each piece of ice, the Corp must spend credits equal to the number of subroutines on that ice.

"Take it from me, there is a point where you have so much money you stop caring. That's usually right before it all comes tumbling down."
Illustrated by Timur Shevtsov
Decklists with this card

Easily the Answer to Sandburg the designer of the Cortez Chip makes it even more fun for the Corp to rez ICE. Want that Ichi 1.0 up? Thats a 7 credit cost. Want to get up the NEXT Silver up with 2 other NEXT ICE online? thats now 5 credits... Its essentially forces any Corp to make sure they have 2-4 credits more to protect servers and makes the corps math go out the window. Excellent card.

(23 Seconds era)
striker511 29
I *could* be wrong, but I don't think this card affects NEXT Silver, as the rez cost is determined when the card is inactive, and while inactive, NEXT Silver would have 0 subroutines. — LynxMegaCorp 30 Jul 2016
I agree Lynx. And Ichi would cost 8 not 7. — quailman2101 30 Jul 2016
Plus the Cortez Chip wasnt designed by Hernando Cortez, the chip fluff clearly says, named after :) — lunchmoney 1 Aug 2016
@Lynx, I don't think that is correct otherwise none of the constellation ice (Wormhole, Orion, etc) would work. — shazzner 9 Aug 2016
I doubt the FAQ will have been updated for this one yet but I'd put even money that the card only counts the number of printed carriage returns on the ice itself when counting subroutines. That makes the Next suite actually pretty effective against him since they're getting all those extra routines for free. — killj0y 11 Aug 2016