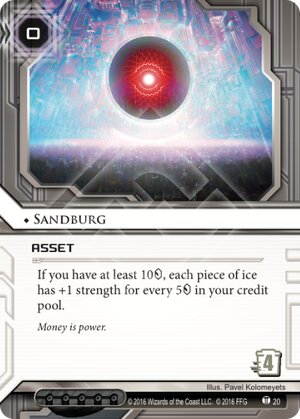 If you have at least 10credit, each piece of ice has +1 strength for every 5credit in your credit pool.

Money is power.
Illustrated by Pavel Kolomeyets
Decklists with this card

So there has already been quite a bit of fuss over Sandburg. Specifically, the current Deck of the Week Haandy Sandburg. I personally believe that this build is one of the best incarnations of the Sandburg strategy. Which is both praise and warning--I think CodeMarvelous has created a powerful deck, but there is little to no way to improve it beyond this basic "NEXT Foodcoats with a coat of paint".

But this isn't a deck review, this is a card review. What makes Sandburg tick?

Sandburg's flavor text pretty explicitly gives away the name of the game. "Money is power". To use this card effectively, a number of conditions need to be met:

The combined effect here leads us to a very clear strategy. Sandburg needs a large number of cheap ice, played out of a rich ID, with a straightforward glacier strategy. If you want lots of cheap ETR ice, NEXT ice (Bronze, Silver, Gold) is a good choice--and of course, the in-faction EtF is one of the richest IDs in the game, especially with the sexbot campaigns, boosted by Breaker Bay Grid for extra dosh. And of course, if you're trying glacier, you use Global Food Initiative, and oh hell we've just built a slightly modifed Foodcoats deck haven't we?

So it's a strong addition to an already strong archetype. But it's creating a new panic because it changes a certain fundamental dynamic of Netrunner.

A classic Stimhack article discusses this in more detail, but I'll summarize. In other card games (i.e. Magic the Gathering), when a player is winning, that helps them continue to win. As a result, any card which relies on a dominant board state to be played is unviable, because the help it provides is marginal when you aren't already winning. But in Netrunner, whenever someone commits resources to scoring or stealing an agenda, they have decreased their resources, giving their opponent (who has not committed so many resources) a chance to respond. If a runner goes bankrupt stealing an agenda, they will be off-kilter for a turn or two recovering resources, giving the corp an opportunity to respond (whether that be a kill-combo or just an additional score).

Sandburg changes this. Sandburg is "win more". If you can maintain not just one but TWO secure, well-defended servers, and you can keep 20 or 30 credits on hand, you can create a lockout board state where the runner simply cannot get into any server.

But let's be honest here. If you have enough of a lead that you can keep 30 credits on hand, while also keeping your entire ICE suite rezzed over at least HQ, R&D, the Sandburg remote, and a scoring remote, you have already won.

Still, because it prevents even that last-turn hail-mary run on R&D or HQ, Sandburg frightens runners. Thankfully, the counterplay is pretty strong. You can run Political Operative. Keeping the corp poor is also completely viable--some updated version of Anatomy of Anarchy, Headlock Reina or other siphon-spam looks nice. Cards that break subroutines without looking at strength are options as well: Quetzal, Grappling Hook, and the newly MWL'd D4v1d are potential options, and all benefit enormously from e3 Feedback Implants. Criminal bypass options like Femme Fatale and Inside Job work nicely. On the jankier end, a solid run by any of those Chaos Theory/Hyperdriver/DDoS/False Echo combos would wreck a Sandburg deck.

So in conclusion, Sandburg is a powerful card, and is something you will have to consider when building your runner decks, but he lacks versatility and has strong counterplay options. As a result, I think he'll drift around in the meta for a while, but as players learn his tricks (and cards like Hernando Cortez and Beth Kilrain-Chang are released) he'll eventually disappear.

(23 Seconds era)
tiedyedvortex 4728
Perhaps it will fade out soon. But for such an obviously powerful card, the rez/trash ratio is about as good as it gets. And it is influence free. Seems a bit crazy to me. — quailman2101 25 Jul 2016
This review now gives +2 strength to all ice. — RubbishyUsername 27 Jul 2016
I would disagree that Sandburg is "win-more" in that the reason you can keep 15+ credits on hand and have 4+ servers iced is because you are using an ICE suite that would otherwise be too weak to be effective. I see it as an alternate approach to converting money into locked-down servers: this is comparable to having the credits to pay for multiple Ash traces, credits to rez big ice, etc. The main benefit that I see to it is that since it doesn't actually consume credits, it can support a secondary strategy in the way that paying through the nose for multiple Ash traces simply can't. Neat card. — internet_potato 27 Jul 2016
This card is a pain in the butt in RP. — quailman2101 28 Jul 2016
Worth noting that you don't HAVE to protect it. A zero cost card that says "The Runner loses 4 credits" is still pretty powerful. — LordRandomness 16 Nov 2016