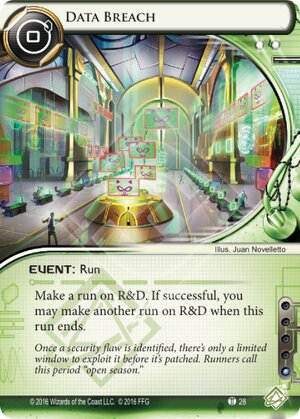 Make a run on R&D. If successful, you may make another run on R&D when this run ends.

Once a security flaw is identified, there's only a limited window to exploit it before it's patched. Runners call this period "open season."
Illustrated by Juan Novelletto
Decklists with this card

Seems kind of hard to make good use of.

The two main reasons are that it:

So, clearly this needs to be combined with some other cards to make it worthwhile, here are a few candidates:

So I see two scenarios I would bother using this in:

Overall, I don't think this will ever see any real play, unless a crazy card that goes with it appears.

(Blood Money era)
Quarg 256
Maybe also Maya, since you have more options to cycle the cards, in that case this gives you an extra clic. But still, very niche. — valerian32 28 Aug 2016
In aditiona to Maya, Imp assures you you can trash the top card if you don't like it. Together you can access 2 cards on a Medium (for example) and then see 3 more cards on the same click. — Goldstep 28 Aug 2016
Deep Thought also shows you the top card of R&D...so if it's already charged, you can see if you can get rid of the top card when you run it. That at least means this will never be outright dead with a Deep Thought sitting around. — LordRandomness 28 Aug 2016
There's also top hat — gabysbrain 17 Feb 2017
That awkward moment when the Criminals got themselves a better version of this card. — HyenaMars 4 Apr 2017