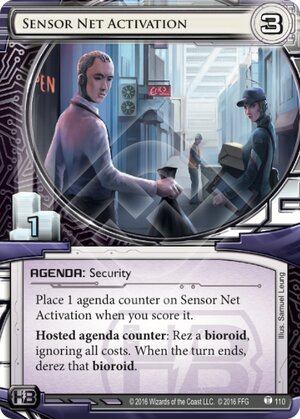 Place 1 agenda counter on Sensor Net Activation when you score it.

Hosted agenda counter: Rez a bioroid, ignoring all costs. When the turn ends, derez that bioroid.

A weird card that is useful as an early-game stopgap, but declines in power as the game continues. It's an agenda version of Bioroid Efficiency Research and Howler, which are themselves similar to good old Blue Sun's better Restructure. It differs in a few important ways:

+: It works during a run, like Howler, so you can surprise runners with a Janus 1.0 while you have 2.

It's worth one point, hooray! And it's fast advance approved!

You ignore all costs, so get out your Low-Rent Terminator and dunk their console!

It's got unsettling art of bioroids, if you like that.

-: It's worse than Howler in that it can't pull from Archives or HQ, which is especially important in a Parasite world. Also, it's pretty obvious that you shouldn't run last click after this hits the score area.

It's a 3/1 with a mediocre single-use ability.

This is a pretty janky card at best, and I don't recommend this for anything other than a super-bioroid deck that needs more stopgaps in between Accelerated Beta Test and Precognition/Hasty Relocation shenanigans. Maybe fine against Criminals with numerous Exploits or something! Though, Howler is very useful as a one-time emergency brake, and Bioroid Efficiency Research is slightly longer lasting.

Toss it in the binder or find some way to use the creepy art as a prank as April Fool's draws closer!

(Daedalus Complex era)
Steamwood 301
Might go good with Brain-Taping Warehouse? Either they let you rez your shit cheap or risk you rezzing it in their face for free without any clicks... — LordRandomness 14 Mar 2017
I think it's best use is to create early/mid game scoring windows by taxing the runner out of a server with heavy hitters like Heimdall 2.0, Fairchild or Wotan. You just need a way to permanently rez them later... Maybe use the scoring window for a Priority Requisition? :D — Krams 15 Mar 2017