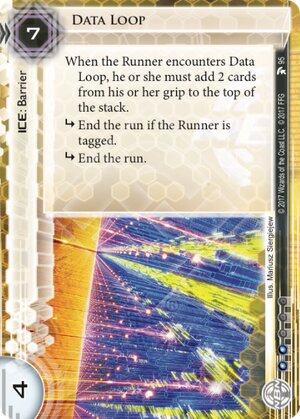 When the Runner encounters this ice, they add 2 cards from the grip to the top of the stack.

Data Loop is quite a good card. On encounter effects always add a nice little bonus to a piece of ICE. And there are now quite a few ICE with these effects. This, though, may be the best one yet.

Forcing the runner to return two cards from their grip to their stack is quite a nice effect. You are setting them back a or two as they will have to redraw their cards. But more importantly, they now have a smaller hand, mid run. Use Data Loop to protect agendas such as Fetal AI and Obokata Protocol, especially in PE. Combine those or other agendas with upgrades like Ben Musashi, Prisec and K. P. Lynn. Then there are traps. Perhaps you are at game point and so the runner feels compelled to check every card you put in your scoring remote. They feel comfortable checking that un-advanced card with the four cards they have in their grip. But after hitting the Data Loop, they suddenly have to seriously worry about a Snare! Especially since they don't have enough clicks now to draw back up and try again.

Seven to rez is on the expensive side, but so very worth it in any kill deck (any deck really as long as you have the money). With four strength and two subroutines, this will cost Paperclip only 3 to break, not great, but not horrible (because of the odd combination of subroutines, Corroder can actually break this for 3 as well, if the runner is untagged). Two influence means you can easily import all three into Weyland or Jinteki if you feel so inclined. Stack two or three on a server for maximum fun!

So I've said it before and I'll say it again. Hunting Grounds is a good card. Try to make room for it, especially if you are relying on an A.I.

Can this flatline a runner?

On its own, Data Loop cannot flatline the Runner because the encounter effect is directly taking cards from the grip and placing them at the top of the stack, not actually dealing damage of any type to the Runner. If the Runner has two or fewer cards in their grip when encountering Data Loop, they would simply have an empty grip after the encounter effect resolves. However, this does make any follow-up damage from another source that much more potentially lethal, as noted in the review above.