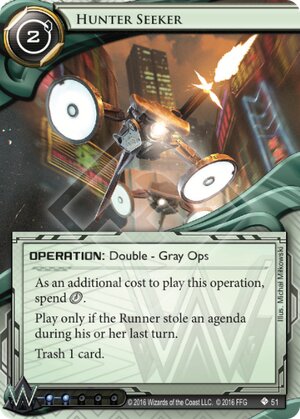 Play only if the Runner stole an agenda during their last turn.

Illustrated by Michał Miłkowski
Decklists with this card

You gotta hand it to FF, they do know how to paint Weyland as this heartless supercompany run by psychopaths. When they are not going Door to Door, sending kill teams, destroying the environment or even blowing up entire city blocks, they are sending their drones on people. Being evil obviously pays well.

So, on to Hunter Seeker. For 2 clicks and 2 credits, you get to trash a runner card of your choice, provided they stole an agenda last turn. This card is clearly the bee's knees in Skorpios Defense Systems: Persuasive Power, where stealing an agenda can result in your crucial ice breakers being trashed and consequently removed from play. Just the existence of this card creates a feeling of dread for the runner and many will often not run until they have a way to counter this card. This early game tempo hit is part of what makes Skorpios so strong. Of course other Weyland ID's like this card as well, and even other factions could possibly splash this card, as 2 influence is very reasonable.

Even if the runner currently has no programs (or none you want to trash), don't forget this card works on any type of card. Trashing their console, a stacked Temüjin Contract or an Aaron Marrón is bound to set them back quite a bit.

There are ways to deal with this card. Obviously, Film Critic lets you add their agendas to your score area and laugh in their face (at least until you run into a Marcus Batty). Sacrificial Construct is a no brainer and should probably be a 2-3 off in every runner deck if Skorpios becomes a meta deck. And obviously Keyhole or Data Leak Reversal decks (eeeeeew) don't care about this card, as they want to preferably steal all agendas in one massive run.