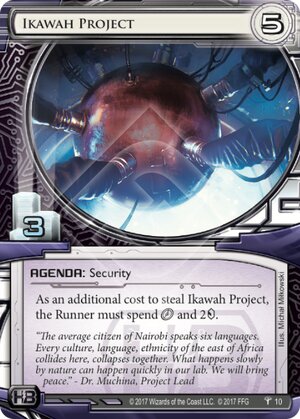 As an additional cost to steal Ikawah Project, the Runner must spend click and 2credit.

"The average citizen of Nairobi speaks six languages. Every culture, language, ethnicity of the east of Africa collides here, collapses together. What happens slowly by nature can happen quickly in our lab. We will bring peace." - Dr. Muchina, Project Lead
Illustrated by Michał Miłkowski
Decklists with this card

This is the HB Obokata Protocol. But of course HB being HB it's less about hurting you and more about stopping you. HB has quite an arsenal of tricks to make you run out of clicks during a run such as the ubiquitous bioroids and Mr Stone.

So let's see what combines well with this. Obviously I'm a sucker for punishment as I always make some dumb mistake when making these lists so be sure to check the comments for what I got wrong this time.

The 2 cost is unlikely to be much of a hindrance to the runner, but occasionally it will trip a runner up. As mentioned it does set up a combo with Heinlein Grid that could be interesting.

What the name refers to is not quite as clear as with some cards. I suspect it's a reference to a writer: Alexander Ikawah who's an Kenyan (note Nairobi in the flavour text) SF writer, at least some of his work (from skimming posts I found on the internet) seems to fit the cyberpunk style.

(Sovereign Sight era)
Silv 314
Another thing to consider is that if the runner steals it, you can get a card from archives onto the top of R&D with Seidr's ability (assuming it's stolen before Seidr has already triggered) — HiddenAway 23 Jan 2018
I don't think Ryon Knight actually would be of any help--by the point the runner has accessed Ikawah Project and paid the click cost to steal it, there is no longer a window to use his trash ability. — CelestialSpark 5 Apr 2018
https://www.facebook.com/pg/ArtByAlexanderIkawah/photos/?ref=page_internal — Anglophobe Anglophile 25 Apr 2018