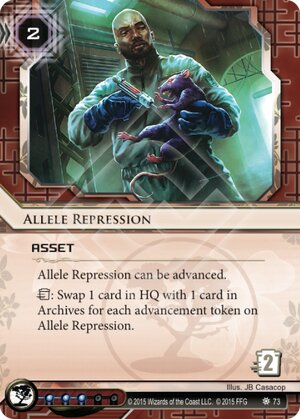 Allele Repression can be advanced.

trash: Swap 1 card in HQ with 1 card in Archives for each advancement token on Allele Repression.

Illustrated by JB Casacop
Decklists with this card

People seem to be viewing this card very narrowly as a way to pull nasty things into your hand right before a Legwork or Gang Sign hit, and yeah, that's obviously great...but it's not even a fraction of what this card is capable of. Another way to look at Allele Repression is sort of like Project Atlas counters or (more aptly) Project Vitruvius counters - it's instantaneous tutoring that you can use on the runner's turn. Of course it works best when you're exchanging cards you were going to deliberately discard anyway (Space Camp, Shock!, etc) with cards that you want in your hand, but more often you'll just be trading whatever junk that's clogging HQ.

Open your eyes - we're talking flatline combos, we're talking fast advance shenanigans, and of course, swapping agendas back and forth to infuriate the runner. This is not just clunky recursion - this is precise where Jackson Howard is sloppy, and this is clickless and versatile where Archived Memories is slow and extremely limited (it's not actually clickless - it frontloads the clicks and then compresses them when you need to play it, whereas Archived Memories and Interns cost you clicks right when the recursion takes place, which can be extremely inconvenient).

Forget about IG, this is a card that could have a slot in almost every Jinteki deck (maybe even replace a single Jackson Howard with it and free up some influence). It's definitely more expensive than some of the other recursion options out there, but it's quite strong and has broad utility.

I love the card.

And hate that everyone is talking about Snare! interaction so much. It's fun but not strong in the slightest (unless it kills).

My recomendation - run it as 1 off. Its not reliable, but it might surprise you and your opponent. When you surprisingly win a game by getting this one more EMP, recur econ card you desparately needed after 4th click siphon, recur your FA tool or cyberdex or caprise you needed at that moment, get right ice that was parasited etc.

This card is getting some love in the reviews so far. I really hope the positive reviews are right - heck, I argued in favour of Fisk Investment Seminar on this very site. I want cards to be playable and powerful and fun. Here though, I'm going to play devil's advocate. My suspicion is that in the final analysis this card sucks.

Compare this to Archived Memories from a purely economic perspective. They both take a to play. With Archived Memories that's the end of the story. You've recurred a card that you want in your hand. By contrast, Allele repression needs advancing before it does anything. 1 and a for each card you want back. Then you have to rez it for a cost of 2. Then you have to spend another card for each card you want to recur. That's some expensive recursion. Sometimes the extra cards you discard will be stuff you don't need: silver bullets that aren't appropriate to the match-up, ice that doesn't help your current board-state, Shocks and the like. That's not going to happen reliably though. I don't know about anyone else, but I'm not in the habit of putting cards that I consider 'junk' in my deck.

All this expense might be justified if Allele Repression was the key to combotastic awesomeness, and it's clear that a lot of folks think that it is. The card most often mentioned is Snare!, and I think that's the best argument for repressing alleles. I'll come back to it. Other candidates mentioned by Bigguyforyou are Neural EMP and Trick of Light. With the former, Ronin instead of Allele Repression does the same job better. Allele Repression offers more versatility, but it will never be king of the kill. The latter could be helpful sometimes, but you need an awful lot of advanced things on the table to make that work. If your deck advances things and then Tricks out agendas it's already quite complicated. More moving bits increases the need for your deck to come out in a particular order and put pressure on slots that you'd really like to fill with ice and economy.

So. Snare. I can imagine the situation where a runner plays Legwork. In the paid ability window after the runner has committed to access I pop my Allele Repression (which I'm imagining I mushined more than a turn ago and further imagining the runner chose not to run) and fill my hand with three Snare!s. I imagine the requisite Snare!s are already in my archives after a long hard fought game. At this point I imagine the runner's legwork will hit two or more of the Snare!s. The odds are in favour of such an outcome given the circumstances. I'm also imagining that the runner hasn't siphoned me broke because I'm Jinteki and that's what happens to Jinteki if it doesn't spend its precious utility slots on Caprice Nisei instead of Allele Repression. In this situation that I'm imagining Allele repression would win me the game. I'm sure it will happen sometimes, but probably not often enough.

One last criticism. It's a 2 to trash, so on top of everything else, it makes R and D porous. Like I say, I'd love to be wrong, but the bottom line for me is that the expense and opportunity cost just aren't going to justify themselves often enough.

(The Universe of Tomorrow era)
Greasythumb 464
Yes, a lot of what you are saying is very true. — Chio 22 Oct 2015
Allele Repression is especially useful in Industrial Genomics; it lets you place traps into Archives without having to overdraw while letting you pull back a few econ operations. I think once we have more Archives-friendly corp identities (Haarpischord also likes this card), Allele Repression will look a lot better. — FarCryFromHuman 23 Oct 2015
3

This is a card that Industrial Genomics: Growing Solutions desperately needed. The ability to put cards from your hand face down into Archives and get cards back (such as those Snare!s the other reviewer mentioned) during a run in Genomics can be devastating to an unprepared runner while making every asset you play harder to trash. This also lets you dump agendas into Archives if you intend to use Jackson Howard when flooded with agendas.

If you're willing to slot one or two Allele Repression into your IG deck, it could make a huge difference for the Runner. Making a Sundew 5 to trash again can really discourage a run on that server, especially while Hostile Infrastructure is out in full force.

I don't think this will see any play outside of Jinteki due to the 3 influence cost and the fact that decks like Butcher Shop would rather run Reclamation Order to get their Scorched Earths back. However, I could see this get used as a singleton in Jinteki: Personal Evolution in order to set up trickery for later or in Tennin Institute: The Secrets Within to drop those Space Camps into Archives. It's a nice utility card to have in Jinteki overall.

(The Underway era)
WardOfTheWoods 701
Why only a one off in PE?. I would think that the possibility of guaranteeing a snare hit by entire HQ into archives and replacing it with snares could be a critical part of a kill combo. — Chio 1 Oct 2015
2

This is a card that can let you pick up three used Snares.

Let me emphasize for people in the cheap seats: you can Mushin this out and use it next turn to yank three Snares out of your bin.

(The Underway era)
Chuftbot 823
You can even do it, after they accepts a successful run on HQ. Yikes! — aermet69 8 Jul 2015
You could, but not during the turn after Mushin (just to clarify) in case anyone makes that mistake. This card could be fun in trap-centric Tennin decks, too. — LynxMegaCorp 8 Jul 2015
2

An amazing and oft-overlooked tool that I believe can have utility far beyond the obvious Industrial Genomics: Growing Solutions hilarity - but those are worth mentioning as well. As others have pointed out, pulling Snare! back in is bread and butter - but say you don't have the cash on hand. A sudden handful of Shock! to a multi-accessing runner - especially one abusing Gang Sign - HQ Interface can be just as good.

I believe the utility of this card increases with the amount of on-access effects you are running. In some deployments, Team Sponsorship and Interns will be the method of choice to recur certain pieces, but the important thing here is that Allele Repression is a paid effect.

I, for one, am excited to see if someone can incorporate its ability with some of the new Data and Destiny on-access tag insanity.

(The Universe of Tomorrow era)
GrantZilla1979 395
One interesting thing to note is that with the latest FAQ it is confirmed that this can pull itself back with its own ability. So if you have 3 counters on this you can pull back two snares and itself, then set it up all over again. With D&D coming out it would be pretty fun to use this to endlessly recur Launch Campaigns, though click intensive. — phlip45 21 Oct 2015