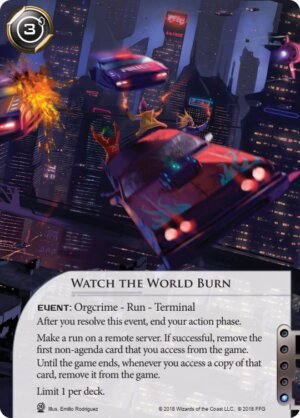 After you resolve this event, end your action phase.

Make a run on a remote server. If successful, remove the first non-agenda card that you access from the game.

Until the game ends, whenever you access a copy of that card, remove it from the game.

Watch the World Burn has two primary uses: trap disarming (this removes the trap from the game before it can fire) and countering asset spam (avoid trash punishment/cost.)

The first is exemplified versus Jinteki Biotech: Life Imagined that's running Cerebral Overwriters, Mushin No Shin, and 5/3 agendas. If they Mushin out a card and advance it, you're usually stuck with gambling on whether it's a trap or an agenda. Watch the World Burn eliminates that threat, letting you run it without fear. But not only does it remove the trap you access from the game, it also makes you immune to that trap for the rest of the game.

The second is obvious against NBN: Controlling the Message, avoiding the trace, and getting a discount on trashing expensive cards. Being able to do it on all subsequent copies lets you cripple a part of their gameplan. Just beware of passing through a Data Raven on your last click (this event is a terminal, so you won't be able to clear tags afterward.)

Even if the card you remove has a trash cost of 5, you still only save 2 credits, which is a bad return on investment. So unless the remove-from-game ability or the all-copy removal are relevant, as it is in the above scenarios, it's not worth using.

(NAPD Multiplayer era)
EnderA 491
The trick is that WtWB can "remove" 3 copies of some cards in 1 access : corp will never install other copies of Mumbab Virtual Tour if the first one is rfg via WtWB, when other copies of Ash are still usefull even with the first one remove. — LeePo 18 Oct 2018
This game takes a lot of space. If you are running short on space then do not install it or simply clean up some files then install. Visit for more information https://www.lenovosupportphonenumber.com/blog/fix-lenovo-error-message-0xc00000e9/ — eudydhe 17 Nov 2018
1

"Some men just want to watch the world burn".

Watch The World Burn is the runner variant of the two community created cards for the Magnum Opus event. For the cost of 3 credits and a run on a remote, you get to remove an upgrade or asset from the game, as well as any other copies of that card you access later on. This is a card where even at first glance, one can see why it is powerful. Not only do you get to get rid of an asset/upgrade for good and nullify the corp's recursion, you don't have to pay its trash cost. And on top of that, it also dodges nasty trash effects, which means that Controlling the Message's trace or AR-Enhanced Security will never fire. Industrial Genomics and Gagarin also hate this event.

Ultimately the power of WTWB lies in its versatility. It is great against pretty much every corp, unless they play no assets or upgrades, which is highly unlikely. Removing an Ash or Rashida Jaheem in the glacier match up is highly relevant. Get rid of Prisec against Argus. Arella Salvatore against Sportsmetal. The possibilities are endless.

One of few downsides is its limited-to-1 status, meaning your are likely to not have it in hand when you need it. Just like Rebirth though, this card can be incredibly swingy once drawn. Also, it costs 1 influence for every runner and it ends the action phase.

The main issue is in its lingering effect. There is no precedent for this kind of thing in Netrunner, except for arguably Azmari. The players will have to remember which card was "hit" by this, so that future copies of it get removed. Will this lead to game losses? I hope not

Still,I expect this card to become a staple in most runner decks, especially if CTM remains the deck to beat for the time to come.

(NAPD Multiplayer era)
Cpt_nice 1599
The lingering effect is no different than Targeted Marketing. Shouldn't be that difficult to remember one card - especially when you can just use the copy of the card that you RFG' — BlackCherries 20 Sep 2018
![The World Burns](https://pbs.twimg.com/media/Dm2QkaFWsAALEKs.jpg"title") I made a reminder card for the effect, feel free to print it out. — NtscapeNavigator 20 Sep 2018
Question : is WtWB works like By Any Means ? I mean you rfg before corp effect, rfg before a Project Junebug take effect, or better than that, against Mumbad Virtual Tour. — LeePo 10 Oct 2018
That is correct as just like By Any Means, there is no option (like there is for Imp) to remove from game, therefore it takes priority over Ambushes / MVT / etc. Of course the exception still is corp-turn runs. — BlackCherries 10 Oct 2018
0

I played this once against Blue sun, breaking several missingos with grappling hook + Kongomata, expecting to burn a illegal arms factory and slammed head first into a standoff, which I instead stole.