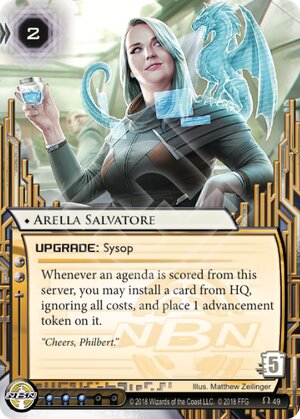 Whenever an agenda is scored from this server, you may install a card from HQ, ignoring all costs, and place 1 advancement token on it.

"Cheers, Philbert."
Illustrated by Matt Zeilinger
Decklists with this card

So, I'll preface this review by saying that I've always had a problem with the trash costs in this game. I truly believe that when Whizzard was released in the very first data pack, he created a problem for the game designers, one that they recognized. He basically got an auto-win versus asset-spam decks and so to compensate for this, I believe the designers started increasing trash costs. This didn't fix the issue. Whizzard still had an easy time against asset-spam but every other runner had an incredibly hard time. (I think a similar problem, that of tag-n-bag existing alongside tag-me, has been termed rock/paper/scissors. You've already either won or lost as the match begins [with only a little exaggeration].) I remember playing many nightmare games against NEH and Gagarin, but even recently I watched a game where a René with a Scrubber out couldn't keep up with a CtM and I thought that was very sad. Now Whizzard is no more and that's a good thing, but many cards with trash costs above what they should be still exist and will until they rotate out. I sincerely hope that those taking on the role of designers now will start to lower trash costs on new releases if only by a little bit.

Arella Salvatore is quite a powerful upgrade. At the basic level, once she is rezzed, she will save you 2s and 1 each time you score an agenda from her server. Nice indeed! While somewhat different, her effect makes me think of the Astro-train of yesteryear. Let's discuss her pros and cons while also comparing her to a similar upgrade, SanSan City Grid.

And I'm certain there are other notable interactions worth mentioning but I'm not as familiar with the card pool as I used to be. In conclusion, this is an amazing upgrade. Because of her versatility, I consider her to be better than SanSan, which is a rather significant statement. I wish it had a trash cost of 3 or 4 so that she would be easier to snipe out of R&D or her remote server.