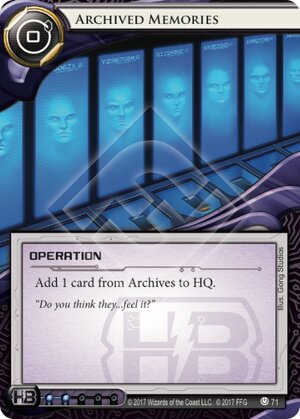 Add 1 card from Archives to HQ.

"Do you think they…feel it?"
Illustrated by Gong Studios
Decklists with this card

One of the few methods of recursion for the corp, Archived Memories is strong for that regard alone. However, it does so with less impact than the other options. Jackson Howard is of course the most well known. Unlike Jackson, it can’t be used in response to a run, unlike Interns it does not install the card, and unlike Reclamation Order it only takes one card back.

Yet of course, Archived Memories is cheaper, not a double event, and does not need to be installed to work. It has its own place as a method for recursion for the corp. It is not a card that has been seen as a crucial linchpin of any deck, but it certainly has a place. That also means it is often the card left just outside the 49 (or 45 or 44 or 40) the final deck list.

(Breaker Bay era)
lynkfox 380
"unlike interns it does not install the card" — GammaCodeX 24 Apr 2015
"unlike interns it does not install the card" yea but, you can just do that with the seccond click you normally pay for interns. Its an upside not a downside that the card goes through your hand; you can archived for an asset and install another. Flexibillity here is in favor of archived. Every deck that uses interns would (or at least should) switch for archived if it wasn't for the influence cost. I'd never play interns in HB before getting 3 archived — GammaCodeX 24 Apr 2015
Well, Interns ignore install cost, so it has a place. — Kroen 24 Apr 2015
all the recursion cards have a place. they all just have different places, and that does not make them better or worse than each other, just different — lynkfox 24 Apr 2015
1

I've always seen Archived Memories almost like a Double that says "Copy an operation in Archives" - often one you've just played out of HQ as your first click. The ability to effectively mirror any operation in HQ or Archives makes it pretty powerful when played at the right time.

Archived Memories works particularly well with operations that benefit from being played twice in a single turn to achieve a quick tempo swing or damage boost, especially if they're the conditional "play only if X" type.

With that in mind, here are a few operations that go nicely with it:

Bad Times (Trash 4MU's worth of programs for 8 credits? Yespls)

Restructure/Successful Demonstration (Or even Hedge Fund in a pinch)

Midseason Replacements (After they've spent everything fighting off the first one)

Power Grid Overload (As above)

(Chrome City era)
lolpaca 1247
If you had an opening hand of Archived Memories and Sweeps Week against Andromeda you'd be able to make 18 credits in your first turn. Sure I mean she'd probably Siphon first turn but thing of the joy of it! — Cliquil 18 Jun 2015
Biotic, Sweeps, Sweeps, Sweeps, Biotic, Archived, Sweeps = 28 creds net vs first-turn Andy :) — lolpaca 18 Jun 2015
Oh wait, 24, so there's no point doing the Biotics/Archived at all. Ah well. It was good while it lasted. — lolpaca 18 Jun 2015