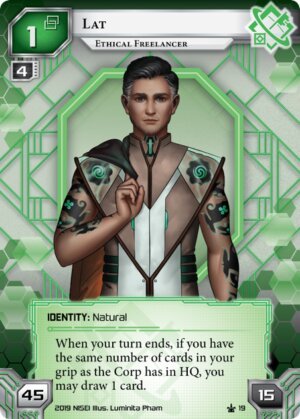 When your turn ends, if you have the same number of cards in your grip as the Corp has in HQ, you may draw 1 card.

Illustrated by Luminita Pham
Decklists with this card

I'd like to thank NISEI for printing Lat, for one very specific reason: I play netrunner to trans genders, and i use Rebirth to do it. The problem with this is that Rebirth is best when your first identity is better in the early game (and has good influence/deck size) and your second identity is good in the late game (very powerful ability). There just... aren't that many identities that fit this combo in most factions, unfortunately.

Now you may say, "But June. Anarch has a bunch of great options for rebirth; (turning MaxX or Valencia Estevez into a different identity can save your game. And a late game Omar can really turn the tables, especially with the popular apocalypse splash in anarch (while also saving you from his inf requirement)! And meanwhile in Criminal... (well actually i haven't tested rebirth in criminal so idk, please share your thoughts. I'd love to rebirth a girl into Az because like, trans mood, but his ability is so early game heavy) But yeah June there's PLENTY of rebirth targets!"

The problem is this question: who on EARTH would fantasize about turning into fucking OMAR? This doesn't let me make jokes about how i wish HRT was as easy as playing rebirth in real life! Absolutely unplayable to me.

No, if we really want to play decks that turn dumb boys into cute girls, we have to turn to our friends in green. The shapers. Not only do you have multiple powerful but bad-influence-limit identities like Akiko Nisei and more importantly Rielle "Kit" Peddler, you can even switch them out for a rare Jesminder Sareen if you desperately need to avoid tags. All of them are wife material for this lesbian, and thus perfect to play rebirth for; exactly the sort of girl i'd want to become if i suddenly got tf'd into a cool cyberpunk girl. Now all we need is an unsuspecting boy to suddenly have their genders transed. Unfortunately, all the shitty boys in Shaper have rotated out; Ultimate Rebirth Target The Professor is gone, kings of weird Jank Nasir and Exile are gone.

Thus, we are left with only one option for "boys who should get shoved into maid outfits": our dear friend Lat.

Nothing to say specifically about the review except I love it. Fellow trans lesbian here <3

I've played Lat a fair bit, and I wanted to offer the flipside of BlackCherries' review. To be clear, I think that review is a valid way of thinking about him, but rather than go over the same points, I'm just going to make a strong argument for the opposite analysis so hopefully the reviews will function as yin and yang.

I think Lat is a good vanilla ID, and the best way to play him is not to worry about his ability too much. Play a standard shaper deck with plenty of events and other easily playable cards, and triggering his ability is really not that hard. There's no need to include special combos, just get used to the fact that most turns the corp's handsize will dictate how many times you draw and how many cards you play out. This is generally not that onerous, and if it is you can just sacrifice your bonus card for a turn.

The corp might choose to do weird handsize things to faff with your ability. That's fine; they usually hurt themselves more than they hurt you. Go ahead and let them play as if they have zero handsize if they want. They're really showing you.

I agree that The Artist is a good card for Lat, but I'd like to highlight the other ability. The option to spend a spare for 2 is good because Lat's ability often leaves you wanting to burn a click without drawing (generally this is a parity problem; it happens when your handsize is even and the corp's odd, or vice versa).

Playing Lat as a vanilla shaper makes Hayley Kaplan the obvious comparison. Both give click compression at the cost of some faff. I won't deny that Hayley is better, but Lat has some advantages. Early on, he feels much smoother - you're not scratting round for s to fire your double installs. And he can play events without them getting in his way too much. I think these factors give him a slightly faster early game. Then there's his . That is very much not nothing at the moment, as IP Blocks and similar are still a common sight, and even taxing the corp a credit when they Hard-Hitting News you can prove crucial.

But Lat's biggest advantage over Hayley is one that goes outside pure strategic analysis. He simply takes much less brain space for the player. I took him to a small tournament for that reason and he was solid. I firmly believe that not having to process all Hayley's combos and options helped me to avoid burnout during the later rounds.

I prefer Symmetrical Visage to ProCo. It drops onto the table much more easily, and Lat's draws are a pretty big nombo with ProCo's 'I'm planning to spend half my s drawing' ethos.

An identity I initially underrated at first, Lat has the ability to draw you a large chunk of your deck, which is something only a few cards in the game’s existence can brag about. Let’s explore him further, shall we?

Lat’s “minigame” revolves around matching the number of cards in grip at the end of your turn vs. the number of cards in HQ. The minigame is checked after the hand-size discard is completed so if Lat draws you a 6th card, a discard down to a hand size of 5 is not needed. While the minigame is fun in itself (and really, that’s all that being a Shaper is about), it can also be a great pressure tool to force an opponent to consider playing sub-optimally. This can come in the form of excessive ice installs or perhaps even excessive drawing on your opponent’s part; this sub-optimal play almost reminds me of what a Criminal like Leela or 419 can do.

Actually playing Lat can be a bit intimidating at first especially given the analysis paralysis that can come with planning all 4 of your clicks (or more) to capitalize on your ability. Common combos with Lat to fix your Lat number (cards in grip – cards in HQ) include:

• Patchwork: If you’re +2 with one click to go, “Lat-chwork” gives you the option to save 2c on a play/install and earn a draw.

• The Supplier / The Artist: If you’re +1, these are both great ways to unload a card from your grip with savings.

• Professional Contacts: If you’re -1, ProCo is a great way to make that last click draw into a Build Script. Alternatively, the same thing could be applied for Artist when you’re 0 after your 3rd click to get a Process Automation.

I hear you asking how Lat stacks up versus 40-deck Shapers, and it’s a fair comparison – both can get through their decks quickly. However, if you can fire Lat’s ability every other turn, the 5-card difference can be made up in only 10 turns with any further Lat-drawn cards just being icing on the cake. And trust me, when you earn enough experience, firing Lat’s ability 60%+ of turns becomes muscle memory.

I actually think the biggest thorn in Lat’s side is the fact that a lot of his gameplan is controlled by the Corp’s actions. There have been many times where I’ve been screwed over by a Sportsmetal off-turn trigger, an Audacity, or just an empty HQ. Ultimately, these factors make me believe that Lat is slightly worse than those competitive Shaper powerhouses for the time being. However, if he’s given a few more hand manipulation cards - just enough to enable him to fire his ability 90%+ of the time - he has the potential to become the best Shaper in the game.

P.S. I don’t recommend playing this guy in Eternal.