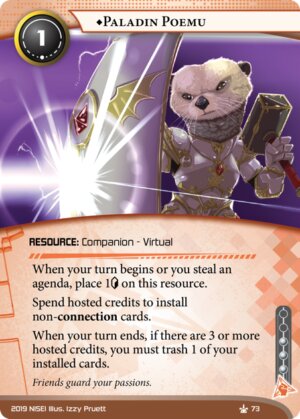 When your turn ends, if there are 3 or more hosted credits, you must trash 1 of your installed cards.

Friends guard your passions.
Illustrated by Izzy Pruett
Decklists with this card

What a out of control card! 1 credit per turn drip for a 1 credit buy-in? Who doesn't want that? I don't know, but I can sure think of a few runners who would.

And you don't have to be one of those aforementioned runners to like this card. The influence cost may make Poemu a bit difficult to justify for anyone who isn't installing a lot (unless you've got a lot), but there's almost no reason not to run the little gal if you're an Anarch, and if Taka can be justified as a 1 off in several non-orange decks, you better believe this will be too.

To cap it off, like every member of Hoshiko's raid party, Paladin Poemu's downside is a joke. There's just too many good targets, so many I cannot possibly name them all--in other words, if you're putting this furry friend in your deck, it's because you've got stuff to install, and if you've gone three turns without installing something, losing your party's tank is almost certainly the least of your worries.

So is our newest little companion too strong? I don't know, but I know for sure you're going to be seeing a lot of her in the future. Because as every seasoned raider knows, a good party needs a good tank, and Paladin Poemu is one of the best I've seen.