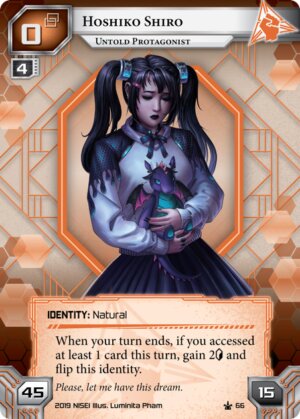 When your turn ends, if you accessed at least 1 card this turn, gain 2credit and flip this identity.

When your turn begins, draw 1 card and lose 1credit.

When your turn ends, if you did not access at least 1 card this turn, flip this identity.

Please, let me have this dream.
Flip side:
I'm going to be my own kind of hero.
Illustrated by Luminita Pham
Decklists with this card 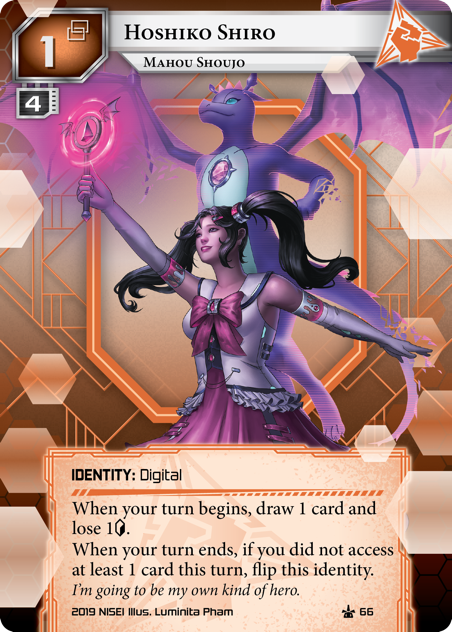 If you want to find the art for the other side. Also, I have just now learned you need to have 200 characters to publish a review, so here I am writing out a paragraph about that fact. So how are ya'll doing?

(Uprising Booster Pack era)
mo0man 461
The two things not mentioned in the spoiler text: Flip side has 1 link and has the subtype Digital (not Natural.) — EnderA 16 Dec 2019
7

I've had a bit of fun with this ID already. Hoshiko and her console, Keiko, give me the impression of how to build a companion deck. If you're running Taka, Fueno, Maemi or Poemu, Keiko helps lessen the credit loss from Mahou Shoujo.

Speaking of which, we finally have a flip identity for a Runner! Let's talk about Untold Protagonist for a bit. 4, 45 minimum, 15 influence... I'm not the best at Netrunner, but I feel this is pretty standard. Her ability, though, is what sets her apart: "When your turn ends, if you accessed at least 1 card this turn, gain 2 and flip this ID". In other words, you have more of an incentive to run. 2 credits as a reward for an access seems good, but then we come to the flip side: Mahou Shoujo.

Side note, my Japanese isn't the best (only two semesters in college), but I think it translates to "Magic Girl". And this magic girl has three things going for her. First, she now has a link. In my LGS meta, there weren't a lot of tracers, but there were way too many Weyland Kill decks. Second, she's Digital. Correct me if I'm wrong, but only one other ID had the Digital subtype, and it was Apex. A card also released in Uprising, DreamNet, can be used without needing to spend time on link. I'm not sure if there are any other digital interactions, but I think theoretically, you could run a cloud suite if you had an additional link, such as from The Archivist. Third, her first ability: "When your turn begins, draw 1 card and lose 1". If you remember earlier, I mentioned how Keiko helps mitigate the credit loss. Simply drop a Fencer, and you get your credit back. Or just install a resource with Poemu. Get your credit back.

Of course, one must always awaken from their dreams. If you don't access any cards while you're playing Mahou Shoujo, she flips back over to Untold Protagonist. So the pressure's on to get accesses each turn, or return to the waking world. As such, you can be kind of screwed if the Corp decides to put a server behind a paywall, force you to trash your precious allies, or simply end the run with an earlier score.

My thoughts on Hoshiko? This ID, if done correctly, can be a lot of fun for you. Hoshiko might be an easy ID to build around. Just make sure you aren't wandering into an ambush blindly.

Great first review. One thing I'd love to see more of is some comparisons vs other Anarch runners. Should someone use Hoshiko compared to Val, for example?

I'll keep that in mind in the future.

I don't know that I would agree that this is completely easy to build around.

You have to try to build your deck to play well no matter what side she has flipped up. That might as well mean you need to build the same deck to be used by two different IDs. IDs where you can't necessarily control which one you are using at any given time. That increases deckbuilding difficulty, rather than decreasing it. It's still a very good ID, however, and I like everything about the card.

I've been out of netrunner for a few years. Stopped around Flashpoint, and only recently got back in, when some friends said "hey, let's play Startup!" So this review is from the point of view of someone who mostly plays Startup format these days. It's possible that there are deep, subtle nuances that I'm missing from not having played this card in standard. You have been warned.

That said. Hoshiko is pretty cool.

It took me a game or two to really "get" her ability. I found it kind of hard to parse, since it's spread out across two sides of her card, but the simplified version is basically:

Or, the REALLY simplified version is, Hoshiko is an alternate take on MaxX: Maximum Punk Rock - She gives you clickless card draw every turn, but at a cost. Hoshiko's cost is different (1 instead of milling 2 cards), but she also has to keep running to keep it going as well. This might seem like I'm being overly reductive, but as someone who played a fair bit of MaxX, Hoshiko felt very familiar.

So let's talk about the specifics, and why Hoshiko is so great.

First, there's the upgrades Hoshiko gets when she's in her virtual magical girl form: One of these is obvious - she's got an extra 1 when she's flipped. But the other one is more subtle - she gains the Digital keyword, which is not on a whole lot of runners. (I think Apex might be the only other one?) Digital is neat because it lets her (And Apex!) make extremely good use of DreamNet. (Which, to be fair, is obviously a card designed with her in mind.)

These are nice. But the real power in her ability is from the ability to get a constant stream of cards without spending clicks. This gives you a huge amount of tempo. Yes, it costs her credits instead, and yes, when evaluating cards, we often assume that 1 is roughly equivalent to 1 card. But they're only roughly equivalent. Cards are still usually better. Runners are super good at getting credits, and only mostly good at drawing cards.

Or, to put this another way, Hoshiko lets you turn your efficient credit-gaining cards into efficient card-drawing, which is almost always a good deal.

Or, to put this another way, if you fill a Hoshiko deck with cards to gain credits cheaply, you'll have plenty of credits AND cards.

So, given that - what's the best strategy for Hoshiko?

After playing with it a bit, I think that ultimately, Hoshiko's goal should be to try to stay flipped as much as possible, and stay rich enough to afford it. And then just ride the crazy tempo she generates to outspeed the corp. There's also probably an argument to be made for running every other turn, and flipping as much as possible, for fewer card draws and more free credits, but I'm not convinced that this is really worth it, since then you lose out on things like DreamNet.

So if you want to access cards once per turn so you can stay flipped, that has a few implications for deckbuilding. Overall, I've had the best luck building for Hoshiko when I build around cards that give extra benefits to successful runs, but don't replace card access. So for example, Dirty Laundry is excellent, but Security Testing is less so, because it doesn't help keep you in magical girl mode.

So Dirty Laundry is great. Bravado is also great, but a bit expensive on influence. Red Team is another excellent Hoshiko card. Overclock doesn't give you money directly, but might as well be a clickless Sure Gamble, any time you're starting a run that you know will cost at least 5. Leech is not technically credits, but it might as well be, given how much cheaper it can make your runs.

Drip economy is also good. DreamNet is obviously built for her, and probably belongs in any Hoshiko deck I can think of. She has a pretty cool console too, in Keiko. It doesn't directly tie into her abilities, but it has the potential to generate a lot of credits, without having to spend time clicking for them. (As long as you include some companions in your deck at least!) This is not a huge burden, since they generate a lot of passive income themselves. Paladin Poemu, Trickster Taka, Mystic Maemi and Fencer Fueno are all good sources of drip econ in their own right, as long as you have something to spend them on. Which you should, if you keep running and drawing cards.

As with most runners, Hoshiko also wants multiaccess, to provide threat against centrals. Here things get a little weird, since the default Anarch solution, Stargate, does not play super-well with Hoshiko's ability. It doesn't allow you to access cards. I've actually had better luck importing The Maker's Eye. The new Jailbreak card is also excellent here - even if it's only +1 card access, it more than makes up for that with the zero cost and free card-draw.

What else. Icebreakers? I don't really have any strong opinions about icebreakers for Hoshiko, other than Odore is amazing, if you go the virtual companion route. (It also plays very nicely with Leech!)

Overall, I've found Hoshiko to be a lot of fun to play. Her ability feels strong enough to be viable. (She's definitely viable in startup. I assume she can do okay in standard as well.) Her theme is unique. And her mechanics are great because they encourage you to always be running. And really, at the end of the day, isn't that what Netrunner is all about?

She can do okay in Standard as well, because @Limes ´s crazy Friday Chip-Imp-Consume-Stargate deck won Worlds 2020

I disagree with your assessment that Hoshiko does best when you run every turn. If we describe credits and cards in terms of clicks, if you run every turn the id gives you virtualy nothing as you gain a card but you lose a credit. Hoshiko becomes more efficient if you run every 2 turns. Then the id basically gives you a card and a credit every 2nd turn for a net positive of an average of 1 click per turn. This play-style is made only better by the way her virtual resources are not just recurring credits but pile up over a couple turns so you can alternate between using Paladin Poemu and Trickster Taka. You might think that this makes her predictable but actually it works the opposite way. It is often times possible the corp will think you will not run one turn when you have been training them to think you run only every second turn, only for you to surprise them by running on a turn they thought was a window. You have ways to mitigate the loss if you need to, with DreamNet in any case.