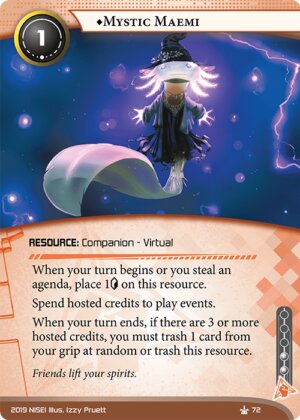 When your turn ends, if there are 3 or more hosted credits, you must trash 1 card from your grip at random or trash this resource.

Friends lift your spirits.
Illustrated by Izzy Pruett
Decklists with this card

Playing Sure Gamble for 7 credits instead of 4 feels bonkers as the runner and miserable as the corp...

Dripping 1 credit per turn is good for a cost of 1 and usually runners play enough events to make us of it. So MM is a good card and has only 2 inf, so it easily splashable in other factions (mainly crim). You want to see the card early, but every other draw makes it a dead one, so 3x are usually hard to justify unless you are playing cards like Patchwork or Moshing where you can make use of the card. This leads to the issue for how many of them you are paying influence when importing them. So often you see them imported as 1x and then together with Paladin Poemu.
This card get's best with Keiko as using it saves you credits and Keiko gives you a bonus credit. Which results in a drip of 2 per turn.
Stealing an agenda is nice, so often it creates value installing it turn 1 and running, but often this is only a bonus of 2 - 3 credits, which are most valuable early game.
In the past you could play it with Same Old Thing & Sure Gamble like Lucky Find in Patchwork MaxX decks. The biggest question is, how many events you need to include to be able to avoid the down side as trashing cards from your hand can be risky. It makes card playable that did not see that much play before, like Run Amok or enable HART and Retrieval Run. I have also seen it being played in Apocalypse decks. And playing Deuces Wild with it feels so good! Against Argus, you can steal an agenda, gain your Mystic credit and remove the tags for profit. But in general, clicking for 3 & gaining 2 cards is bonkers.
In crim it's especially interesting for Ken Tenma and events like Diversion of Funds, Inside Job, Spear Phishing but of course for every other run events. But of course the go tu runners are 419 and Leela. It's a good card, the question is, can you find slots for it? And how many events to run?
It feels home in Hoshiko Shiro: Untold Protagonist decks as she has a lot of support for it, like DreamNet and her companions.