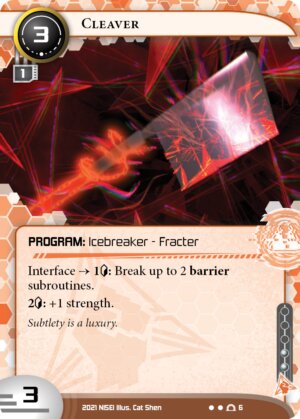 Subtlety is a luxury.
Illustrated by Cat Shen
Decklists with this card

Since somehow nobody’s written a review of this, and I’m playing around with constructing Startup decks, I thought I’d do a side-by-side comparison of how it stacks up against Corroder in the format, since deck construction will likely have you choosing between the two, even outside of Anarch.

TL;DR: They’re very comparable, and which one is ultimately more efficient for you will depend largely on what’s showing up in your Meta. Corroder is always going to be equal or better for Single-Sub Barriers, and Big Hairy Monster barriers will make you want to lean towards Corroder as well, so Cleaver certainly isn’t going to supplant it, but Cleaver might be the most cost-efficient choice depending on other factors. Cleaver’s edge is increased by supporting it with Ice-weakening tools, so it might ultimately be a little better in-faction, but Corroder is almost certainly better out of faction.

So: On paper, they’re obviously similar. Both Anarch Fracters, both 2 Inf. Cleaver is 1 more to install, but has one more strength and can break 2 subs for 1 where Corroder has to pay 1 per sub. But Cleaver costs twice as much to boost strength, and here’s where the math gets particular.

Some Barriers in Startup are easy to calculate, and for these, Cleaver is equal or better than Corroder: Eli 1.0 is 3 for a Cleaver, 4 for a Corroder. Same for Gold Farmer. Ping and Wraparound are both 1 for either. Both handle Palisade for 1 or 3, depending on where it’s installed. Simple enough.

Advanceable Ice gets trickier. Akhet, for instance, is 1 for a Cleaver when naked, and 2 for a Corroder. If the Corp gets those three tokens on it, though, it becomes 5 for Cleaver vs. 4 for Corroder. At three tokens or fewer on Ice Wall, Cleaver is equal or better, but once it gets advanced beyond that, Corroder takes off running in advantage. Pharos is much more distinctive - Both can crack it for 6 if it has no advancement tokens on it (5 if they’re ok with taking the tag) but once it’s advanced, that’s a pricy 11 for Corroder, but a whopping 16 for Cleaver! Now, it’s worth mentioning that in any realistic scenario where you’re dealing with an advanced Pharos, you’re going to have other ways of dealing with it, but in case you get truly ganked by it, Corroder is definitely the better card to have.

For the last three odd Barriers in Startup: Corroder is equal of better for all instances of Sandstone and Brân 1.0, while Cleaver is equal or better (usually better) in all instances of Hagen except for where your fracter is your only installed program, meaning no other Icebreakers and no worry about letting the program-trashing sub fire.

All of this is, of course, academic, especially considering that these are both Anarch cards. Like I said above, any runner will be looking hard at these cards whether their ID is orange or not, but in Anarch, you’re going to have access to a lot of tools for weakening Ice, and in Startup, it’d be hard to NOT be using those tools. As a general rule, if an Ice has multiple subs, then the closer its strength comes to 3, the more likely Cleaver is to come out ahead. But even in the best situations, it probably won’t come out ahead by much.

It's one of the only fracters that can break multiple subroutines for 1, so there are a few ice where you'll get a 1 credit advantage using Cleaver rather than Paperclip. Most notably Border Control and Hagen (if you have 3 breakers in play).

With the current ice mix in play, Cleaver is a plausible alternative to Paperclip. Adjusted for ice popularity, a Cleaver costs 5% more to break the median barrier encountered than Paperclip does (ice popularity as of September 2021).* If you have Ice Carver, Cleaver costs 15% less than Paperclip to break the median barrier. There may actually be viable tournament play in this direction. (Depending on how much you value breaker efficiency vs. Paperclip's side features like not relying on combo cards, resilience against rigshooting, and being able to install on demand).

Having a 3 strength fracter allow for very cheap interactions with barriers. Using Leech and Ice Carver allow you to cheaply deal with any barrier. Using all 3 strength anarch breakers allow an anarch runner to break ice even more efficiently than shapers! Sad sad shapers.