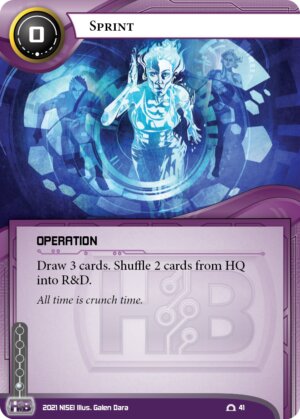 All time is crunch time.
Illustrated by Galen Dara
Decklists with this card

Given that it comes in the same virtual box as Jack Howard Jr. it's easy to overlook or write off Sprint. A lot of people are excited/apalled/conflicted about the former card, and with good reason; J-How Snr. was absurdly good. Every competitive deck played him, to the extent that his influence cost outside of NBN was referred to as 'the Jackson tax'. This was exacerbated by the fact that someone, somewhere, had decreed that the type of agenda burying Jackson offered was a part of the yellow colour pie, meaning that all of the (worse) alternatives were yellow too. This idea was eventually dropped, but FFG hadn't learned their lesson about the value of recursion into R&D for the corp. This led to horrible mistakes like Museum of History, and the less egregious, but still eventually banned Whampoa Reclamation. With this history, it's no surprise that this is a controversial area of the game's design space.

But this is a new era, and System Gateway shows an appreciation of the lessons learned from the FFG years. The fact is that Jackson-like effects allow corps much-needed space to breathe, and enable more flexible deck-building choices. As long as their power is appreciated, it's a good thing that they exist. Accordingly, three out of four corps get an agenda hiding tool among the cards which will define them going forward. There's the afforementioned Spin Doctor, Jinteki's new unique 3/2, Longevity Serum, and this card. Weyland's lack of a tool like this in Gateway subtly nods towards the fact that it's always had Rush as part of its identity, and if it does want these tools, the splashable options are only an influence each. In standard, it also has the entirely playable Drudge Work.

So, with all of that preamble out of the way, let's compare Sprint to Spin Doctor. In terms of the raw numbers of what you get, Sprint is better in some ways. Spin Doctor draws two and recurs two. Sprint draws three and buries two. The biggest difference, of course, is that Spin Doctor recurs from archives, while Sprint buries from HQ. If you're using these powers to fight agenda flood in HQ, that means to use Spin Doctor you'll have to draw and discard down, and in that case Sprint's numbers mean that it's superior. Spin Doctor offers a lot more flexibility however. Having it installed face down gives you a two-card draw that you can trigger in any rez window. Once it's rezzed, you can fire its recursion instantly too, meaning you can throw agendas into archives and wait for the runner to go their before you shuffle them away, just like the Jackson of old. It can also be used to recur non-agenda cards, like Anoetic Void, which it has horrifyibgly good synergy with, or fast advance tools.

For these reasons, if you're splashing for one of these tools, you're almost always going to choose Spin Doctor. But in faction there's a few reasons to consider Sprint. Apart from its marginal but undeniable superiority for the one job it does, there's also the fact that, being an operation, it doesn't have a trash cost. This means it doesn't die out of R&D, which could potentially offer the runner another access there, and once it's in HQ it's likely to be there until you need it. It's also worth looking at the ID it comes with in System Gateway: Precision Design. There's a couple of reasons why PD in particular likes Sprint. Firstly, it already has recursion from archives on the ID, so Spin Doctor's power is less needed. Secondly, its extra handsize means it can draw harder. This makes it easier to hold onto Sprint until you want it (it also mitigates agenda flood when you're drawing to find Sprint, but that would work just as well if you were drawing for a Spin Doctor).

In conclusion, Sprinting is usually worse than Spinning, but it's closer than you might think. Also, more generally, the sky is not falling. The existence and playability of cards like Sprint is testament to the fact that we are not returning to the days of orange waistcoats and stuffed toys.