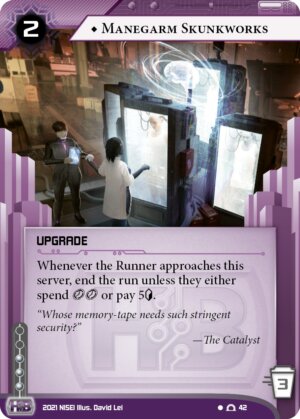 Whenever the Runner approaches this server, end the run unless they either spend clickclick or pay 5credit.

"Whose memory-tape needs such stringent security?"
—The Catalyst
Illustrated by David Lei
Decklists with this card

For those unfamiliar, Manegarm Skunkworks makes for a powerful combo with Anoetic Void. The two cards synergize for an extremely hard-to-break server, outside of things like Political Operative from the runner.

But I want to talk about the card outside of that particular upgrade combo. It's still a good card -- but I would argue not quite as good as one would be led to believe by its effectiveness when combined with Anoetic. First, Manegarm doesn't combo with plenty of other effects that the corp can use to force an ETR, such as Border Control or Bio Vault. This is because the last paid ability window before breach of the server comes before the "approach" step during which Manegarm would trigger. So, although the corp can force the runner to pay for Manegarm before firing Anoetic to end the run, the corp cannot do the same thing with BC or BV; in those cases, Manegarm provides no additional tax.

In the default case for Manegarm, it asses a 5 or 2 tax on the runner to enter a server, and then likely another 3 tax to trash. This is roughly equivalent to an Ansel 1.0 as broken by Bukhgalter, or a Ravana 1.0 as broken by Gordian Blade. Economically, Manegarm is a like a mid-strength Bioroid ice that trades its cheaper cost for trash-ability. In its favor, it can be used to fake in the remote, and doesn't cost additional credits to install in taller servers; to its detriment, it makes R&D and HQ more porous by being trash-able, and does not persist in a remote after a run. Let's take the following theoretical Ice:

When the runner breaches this server, they may pay 3 to trash this ice.

: Break subroutine on this ice.

Now that's a pretty good piece of ice! It's like a big Eli 1.0 with a downside. In short, Manegarm is good as an efficient way for the corp to deploy resources in the early and mid game. It is not a late-game defensive upgrade per se.

Most Haas-Bioroid deck will benefit from this amazing defensive upgrade. The only downside of it is that it is unique. Which mean you can protect only one server at a time.