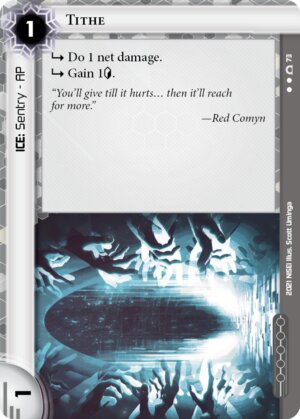 "You'll give till it hurts... then it'll reach for more."
—Red Comyn
Illustrated by Scott Uminga
Decklists with this card

Cheap and annoying neutral ice. If will force the runner to install a sentry breaker (killer). Any sentry breaker will break it for 2, except Bukhgalter, for which it will be free.

Does it mean this ice is useless? No. But it means that you will probably not want to install a second, once the killer is on the board, unless you want to bluff a stronger ice.

Of note, shaper who use Ika will find this ice the most annoying. Also, it is recommended to just not install it against Tāo Salonga: Telepresence Magician, because it would then be placed where it defend the least.

Because it is cheap, it is a good outer ice, letting you be protected from Hippo. Unrezzed, it could potentially attract a Botulus or Boomerang. In which case, just never rez it and trash it, trashing the runner card with it.

While the ice will not protect your server, it will tax the runner for a marginal cost for you. Fair trade.

The quote, art and effect are are totally in line with one another. Good design.

In Startup, you also can put these on the outside to defend against the ubiquitous Inside Job, (especially effective in Jinteki and HB, where there is no 1 cost ice), as well as Rielle "Kit" Peddler: Transhuman.

@Spaulding: Rime is usually better for that purpose; it's Startup-legal, costs 0, and is mythic, meaning that you can't get rid of it to reach the ICE inside even using two Hippos. It also costs more to break if the Runner is using Bukhgalter. Tithe is better against other <b>killer</b>s, though.