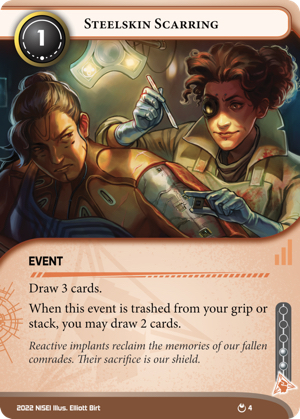 When this event is trashed from your grip or stack, you may draw 2 cards.

Reactive implants reclaim the memories of our fallen comrades. Their sacrifice is our shield.
Illustrated by Elliott Birt
Decklists with this card

And here we have a sort-of reprint of I've Had Worse, although there are some key differences.

They both draw you 3 cards for 1 credit when played. But Steelskin only draws 2 cards instead of 3 when it gets trashed. To make up for this, it now triggers off any type of damage, meaning all the newly released core damage cards will have you drawing 2. If any corps are still brave enough to be on cards like Cerebral Overwriter with the release of Borealis, Steelskin will help you recover from that.

Furthermore, Steelskin also works when trashed from the stack, which is a nice bonus. This would crucially have worked with MaxX: Maximum Punk Rock's mill ability, which would have been a bit ridiculous, but she is now rotated. Frantic Coding and Labor Rights are runner cards that can put this in the bin. There is also Persephone but... yeah. On the corp side there are janky cards like Aimor, although you are very unlikely to run into those. Engram Flush can trigger Steelskin (relevant in Startup) but since it says "may", the corp would need a good reason to let you draw cards for free.

So is this better or worse than IHW? For being so flexible and with Esa probably being a force to be reckoned with going forward, I would rate this slightly higher. But time will tell.

Some other fun cards this works with: Patchwork, Carnivore, and Moshing.