Trash the top 3 cards of your stack. Shuffle 3 cards from your heap into your stack. Draw 1 card. Remove this event from the game instead of trashing it. 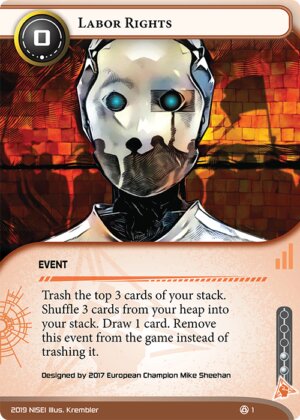 Sort of like a runner Genotyping or Preemptive Action. If your deck is empty, this is pretty amazing, you can get back 3 extremely high-value cards. However, it's 2 influence outside of anarch, which could have been spent on a high-value card in the first place.

Drawn early, it's awkward, since the selection options are limited and the reward is delayed significantly. Drawn late, it's great! So its value is highly variable, and works well with other cards that give it alternate value, like Patchwork. Pitch it early, use it late.

Levy AR Lab Access is better if you expect to reliably burn through your deck, but is restricted in most formats. This could be used to supplement that, helping evade the unfortunate situation in which all your Levy's and Same Old Things are in the heap. Alternatively, it's great when you have a specific few cards you want to recur, like multiaccess, utility, or disruption (e.g. The Maker's Eye, DDoS, or Apocalypse.) Burst economy like Sure Gamble isn't worth nearly as much, because you're already spending a card to put them back, similar to using Same Old Thing.

In my opinion, it's very well designed.