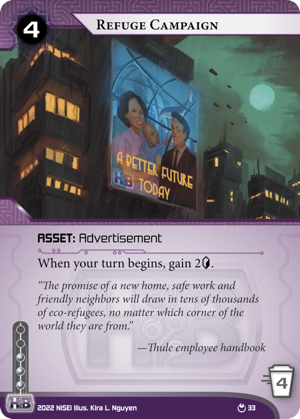 When your turn begins, gain 2credit.

"The promise of a new home, safe work and friendly neighbors will draw in tens of thousands of eco-refugees, no matter which corner of the world they are from."
–Thule employee handbook
Illustrated by Kira L. Nguyen
Decklists with this card

With Midnight Sun, Haas-Bioroid has now so many campaign going! Refuge Campaign, Marilyn Campaign, Nico Campaign, wow! This Refuge Campaign is the least attractive of the three, because it is more like a PAD Campaign than anything.

Like PAD Campaign, it will take two turns to make a profit. It also cost the same 4. Unlike PAD Campaign, if it is trashed the turn after you rezzed it, it create a 2 differential, instead of 3. Then, why use it? Because it fit in an horizontal deck.

If you create an horizontal deck with lots of assets, this can generate significant revenues. Getting 2, instead of 1, once it is "paid back", is significative. Trashing it cost quite a bit. This means the runner must deal with this as soon as possible to avoid giving the corp an unending supply of credits. This is why you must protect it.

That being said, with Pinhole Threading being commonly used, it will not be possible to protect this asset well.

One strategy for this asset would be to try to exploit the credit differential between the corp and the runner (by using Hard-Hitting News or Punitive Counterstrike for example), then Refuge Campaign can really help, because of its high cost.

The thing that I do not understand for this card is the influence cost. Why 3 influences for the least powerful HB campaign, while Marilyn Campaign is 1 influence. Because of this, Refuge Campaign will most probably never be used outside Haas-Bioroid.

Refuge Campaign will probably be used in more niche deck, mostly "asset spam" (horizontal) decks. But Netrunner is diverse and someone could find a clever use of this.

The art and the advertisement quote is like the effect : it makes you feel that it is expensive for the value of the effect. Nice!

I imagine they were a little cautious because it's the replacement for Eve Campaign, which was a powerhouse in its day.

Refuge Campaign is a terrible card.

Essentially, it’s PAD Campaign but doubles its price and doubles its payoff. If you compare this to Nico Campaign, Nico gives you net 1 credit after 1 turn, and after 3 turns, it earns you net 7 credits plus a card. Refuge, on the other hand, nets you -2 credits after 1 turn, and requires you to wait 6 turns to match Nico’s earning. Although Refuge has a higher trash cost, you probably don’t want to install it naked, and you probably want to get your money ASAP.