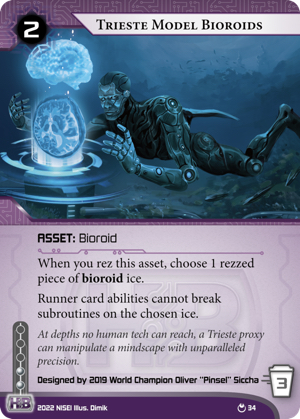 When you rez this asset, choose 1 rezzed piece of bioroid ice.

At depths no human tech can reach, a Trieste proxy can manipulate a mindscape with unparalleled precision.
Designed by 2019 NISEI World Champion Oliver "Pinsel" Siccha
Illustrated by Dimik
Decklists with this card

Yikes... so now Ansel 1.0 + Ganked! is even scarier jank. If you run past Ansel and the corp has an unrezzed card in another server, do you dare access?

Here are some more characters for you, you silly line of javascript.

And Light the Fire!, I suppose, though you won't know when you need to use it.

Er, wait... accessing the Ganked! with Pinhole Threading still gets your rig trashed, doesn't it?

Aha! No, it doesn't. With Pinhole Threading, you access just the one card, so the Ganked! infinite loop can't happen.

The problem is you often don't know you should use Pinhole threading or Light the Fire! before a Trieste is rezzed. Is this card behind this Ravana 1.0/Ansel 1.0 à Trieste ? an agenda ? a Ganked! ? or a Nico Campaign ? If you pinhole/LTF blindly, you'll still have to deal with the consequences as the corp rez a Trieste from another remote. Speaking about jank, did I tell you about NEXT Activation Command ?

Now we're getting to the fun stuff.

I really like the design of this card. It can make one piece of ICE super difficult to get through. And you can rez it at instant speed, so it can be a mid-run surprise. But it also feels "fair", since it's an asset that needs to be protected. So the runner can always just go trash Trieste, and THEN go about whatever shady runner business they are up to. So she can't make servers truly impregnable. And bioroids can always be clicked through, in a pinch. But if the runner doesn't know they're going to need to spend clicks, she can be an amazing surprise!

Anyway, some fun thoughts about this card:

I think this is a strong card. It has some jank potential, but even without the jank it's a good scoring tool by itself. It's limited to bioroid ice, so it's not going to be useful to many decks outside of HB, but it seems like a godsend for making bioroid decks have a few more teeth.

Looking forward to iterating with this!

Don't forget to mention Loki is still legal in Standard and doesn't have the bioroid "clic-to-passthrough" flaw. Being able to copy any rezzed bioroid, it's an incredibly good target for Trieste. Plus being unsubtyped by default helps to mitigate the bypass abilities of a few breakers (abagnale, afterimage)

One note on the surprise factor, in case players miss this: You cannot rez cards during ice encounters. Your last chance to rez Trieste Model Bioroids is when the runner approaches the ice you want to target with it. This means the runner has a chance to jack out without the ice getting to fire subroutines, unless that ice is the outermost on a server.

Never mind, scratch the above: the runner could only jack out before encountering the ice if they had a Flip Switch or other special ability. The rez windows during movement and approach are all after the jack out decision point.