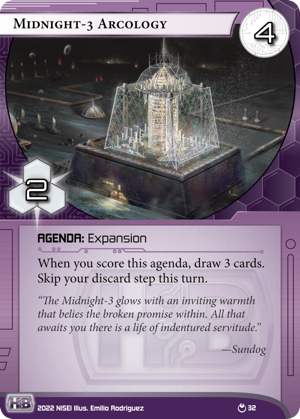 When you score this agenda, draw 3 cards. Skip your discard step this turn.

"The Midnight-3 glows with an inviting warmth that belies the broken promise within. All that awaits you there is a life of indentured servitude."
–Sundog
Illustrated by Emilio Rodriguez
Decklists with this card

As the corp, would you rather have 7 credits, or 3 cards? The answer to this is almost always the former, and that's why several weeks after the release of Borealis, I have yet to see this card make an appearance in any HB deck, and I don't expect to see it pop up in (m)any decks going forward.

Is this agenda any good? I think it is right on the edge of "playable". And that's not good enough. Sure, drawing cards is usually nice but as the corp, cards come pretty cheap to us anyway. The skipping of discard is quite sweet, especially since on the turn we score we are most likely to be over our hand limit anyway. If we're Asa and we start next turn with 10 cards (6 + 3 + mandatory), we can empty it out with a bunch of installs. Too bad Lateral Growth just rotated. We could play something like Hansei Review to get more value out of the extra cards. But is that worth a deck slot in a world where shuffling cards back is cheap and easy? Nah.

This card's biggest problem is that even with the recent ban of Cyberdex Sandbox (and SSL a while back), most corps aren't starved for good agendas. And as a 4/2, this just doesn't make the cut. Not in a world where every corp can play Offworld Office. I understand and agree this could never have been printed as a 3/2 (Sports is already looking super strong). But as already established, even with all the support we have gotten, 4/2 is still a bit of an awkward type to score. So the ability has to merrit its inclusion. And with M3, that isn't the case.

HB even has other decent 4/2's you could consider. Hell, I think Architect Deployment Test is a outright good agenda. Even Remote Enforcement is arguably better than M3. When is the last time you've seen either of those? Right. And then there are truly amazing agendas like Vitruvius, Luminal Transubstantiation and now also Élivágar Bifurcation.

So yeah, I think this agenda will probably be binder fodder. Or at least it will be in Standard, until we get a big shake-up of the agenda suites.

This is an interesting agenda. It allow the corp to get 3 cards without worrying about hand size next turn. This gives Haas-Bioroid yet another click compression tool.

Why would you play this? Because drawing cards makes your game better and for this, there are at least two archetypes for which this could be good.

The first is the asset-spam type (AKA horizontal deck), which always struggle to get cards in hand fast enough to put them down and create a huge board. The ID that play the most this type of deck in HB is Asa Group: Security Through Vigilance. Getting 2 points and 3 cards is an excellent proposition, creating more click compression.

The second archetype is a glacier deck (AKA vertical deck) using Jinja City Grid. Drawing 3 cards means possibly getting more ices installed clicklessly, while diluting the hand. The usual ID for glacier in HB is Haas-Bioroid: Architects of Tomorrow.

There are possibly more archetypes, but those two are the for which I think Midnight-3 Arcology would have the most value.

Of note, the art and quote on this agenda is inspiring, on top of a well balanced card. Kudos!