Mixtape for the Street Sweepers (20th at Worlds, 4-1 CoL, Un

For Crown of Lasers I agreed to be the team's Shaper/NBN player, the factions I played i my very first tournaments which still hold a dear place in my heart even if I now stray elsewhere a bit more often.

For runner I decided to play Aesop's Hayley, it being an archetype I have a lot of experience with and one that has given me decent competitive success. The lists have seen a lot of variation since the old Pitchfork days with trips to the Circus, the Beach and a foray into the Music Industry but all feature the similar core principles of versatility on top of a solid economic engine.

As the worlds MWL effectively killed the Engolo lists I began to focus more on the compile/Brahman style with Stargate as the key late game tool. Initially I found these lists very difficult to play as I would often find my breakers were not where I needed them (Cyber-Cypher locked to a central or D4v1d in stack with no way to get it out to break the remote) but they were putting up results elsewhere so I worked on my play and mulligan strategies and began to see improvement.

My list ended up pretty close to what @TugtetguT played (and in fact matches @Rjorb's from Sydney Regionals) - I dropped 1 Paricia for a Freedom Through Equality to give a faster out vs 6 agenda decks or sports combo when I am stargating everything and I took Ika instead of Na'Not'K as it gives me a second good breaker vs Tour Guide and has good numbers otherwise despite sometimes being fiddly. I also didn't bother with a Feedback Filter which probably meant my matchup vs IG and certainly Kakugo decks was worsened but I successfully dodged all of those in the main event.

I wasn't entirely set on taking this for Worlds itself but at Crown of Lasers it felt very good and I went 4-1 and leaving me comfortable sticking with it. My team (A Bunch of Appealing Chaps in our fetching banana attire) made a very respectable 8th and had an absolute blast.

Why Mixtape for the Street Sweepers? 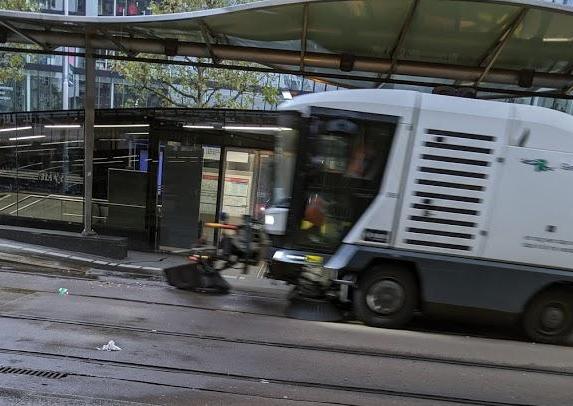 On the morning of Worlds I was standing outside the metro station in Rotterdam waiting for part of the UK crew to leave their weird Escher-hostel not paying much attention to my surroundings when suddenly a street sweeper drove right past me.

I was pondering this close call when it turned round and passed me once again.

Immediately I began to wonder what sign the universe was trying to give me about my Worlds performance.

Was I going to be swept?

Was I going to be the sweeper?

I split my first two rounds (Hayley beat Blue Sun on time and Mushin Aginfusion by guessing right) - clearly the sweeper had been trying to tell me that by going past twice in opposite directions.

I then split round 5 (beating Tigerbread RP with a very strong Hayley start and early paricias) and ID'd 6 and 7 to go into day 2 on 9-5, the minimum required but still the best of my three worlds performances.

On the morning of day 2 I am once again at the metro station but this time inside due to rain and slightly earlier due to needing to make registration.

I hear the low roar of an engine coupled with the hiss of brushes - The Sweeper is back!

This time I know to pay attention to his signs

He... drives around the building

Then drives past and away to the next task

I try to catch his eye but he stares straight ahead

His purpose is clear and requires no acknowledgement from me

I arrive at the venue and register, confirm that I need to... Sweep out to make top 16

Pairings go up and I sit down

My opponent does not appear

A mistake, they were to be dropped

I get awarded a bye, a free sweep

The Sweeper cast a spell of some sort, blessed me at the event and gave me the points I needed to make the finals...