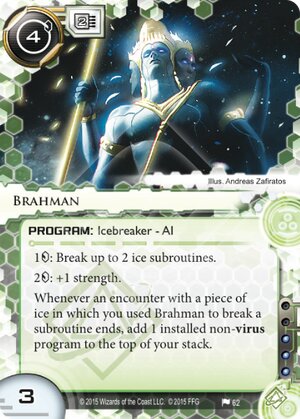 Interface → 1credit: Break up to 2 subroutines.

Whenever an encounter ends, if you used this program to break a subroutine during that encounter, add 1 installed non-virus program to the top of your stack.

At first glance Brahman seems to have a steep disadvantage (tempo loss) but looks can be deceiving.

The ideal deck would be a Brahman and a Scholar.

Lets look at the so-called 'disadvantages' and turn that frown upside down:

Net-Ready Eyes gets you to str 4. Datasucker can get you the rest of the way if you need it, but you probably won't need Brahman for str 5+ ICE because of the next point.

Cyber-Cypher can target any server you want (Turing maybe?) and for Tollbooth or other annoying ICE you can target and maybe even re-target Femme using Eureka!.

Paricia's 2 are renewed every time it is installed.

Chameleon and LLDS Processor comes to mind but Chameleon seems a bit pointless when you have inifinite D4v1d and Brahman's incredible efficiency at breaking subroutines.

You need to draw that program again, costing a

Ideally with Oracle May to get paid for doing what you want. John Masanori gets that program back in your grip almost immediately. Patron is cheap renewable card draw.

Earthrise, Drug Dealer, ProCon, Astrolabe and Wyldcakes are other handy draw options, all of them clickless except for ProCon.

You need to install that program again, costing a

You need to install that program again, costing s

Scheherazade means you get paid for re-installing programs. Sahasrara gives you a 2 discount.

Modded installs D4v1d and the dog breakers for free.

A lot of the cards I have mentioned like Paricia, Savoir-faire and SMC are 0 to install. Inti (for Wraparound) and Pawn (0) are possibilities as well.

If you don't want to use Scheherazade then London Library will reinstall programs for free temporarily. Make sure you bounce them with Brahman before your turn ends! Credit to Lynx Kuroneko for publishing this idea.

This potentially needs a lot of

...and you can't use Leprechaun, NetChip or Omni-Drive if you want to use Scheherazade. This is probably the biggest disadvantage of this kind of set-up and there's no real silver bullet.

You can play around it by leaning more on your other breakers and Brahman gives you complete control over how much you are currently using.

You can stock up with Akamatsu and CyberSolutions.

Brain Chip and Maya help with too.

Other console options include Monolith - which sort of synergises since you will certainly have programs in your grip to install and Ekomind, but both of those take a long time to set up.

Sacrificial Construct prevents Marcus Batty or Keegan Lane from trashing your entire Rig when it's hosted on Scheherazade.

Paricia doesn't do upgrades. SanSan City Grid is 5. Use Econ.

Test Run works with Brahman (it's going to top of stack anyway right?) it works with Oracle May, it works with Eureka! and with all breakers mentioned earlier too.

(Salsette Island era)
Zakalwe 479
*foams at mouth, then builds deck* — LynxMegaCorp 30 Apr 2016
so nice review — muter941 2 May 2016
and Harbinger(in Apex) is too — muter941 2 May 2016
Brahman is exactly the kind of AI breaker green has always wanted - one that inspires all kinds of Shaper bullsh*t. :-) — PureFlight 3 May 2016
I want to see this in @HopelessHeretic's Professor deck (although 2MU might prevent that from working). — PureFlight 3 May 2016
Overmind + Brahman would maybe work in a Adam / Safety First / Brain Chip deck ? — Syntax 4 May 2016
Worth mentioning Imp, too, even if it is 3 inf. It's like the Paricia interaction on steroids. I was gonna get all hype about Cache until I realized that it wasn't actually more efficient than clicking for creds probably (although Hayley might be able to make it work) — LordRandomness 22 May 2016
@LordRandomness: "...add 1 installed non-virus program to the top of your stack." — shimya 29 May 2016
._. — LordRandomness 6 Jun 2016
To those doing the math at home: Lady is MWL, Cuj.o and Rex are 3 each for shaper, D4v1d is 4 plus 1 for MWL, Oracle May is another 1. Be aware that MOST of your influence is spent setting up this combo. — Goldstep 13 Aug 2016
Also...I know I'm super far behind...but "Atman is Brahman." Not an especially efficient combo, bouncing Atmans...but thematically interesting. Especially if your runner doesn't believe in their own existence. — StarlightCrusade 5 Dec 2016
What happens if there's no program to bounce? Can I still use Brahman to break? — Vortilion 25 Oct 2019
Yes. There is always at least one program to bounce (Brahman itself). — BlackCherries 25 Oct 2019
Makes sense. ;-) Thx! — Vortilion 25 Oct 2019