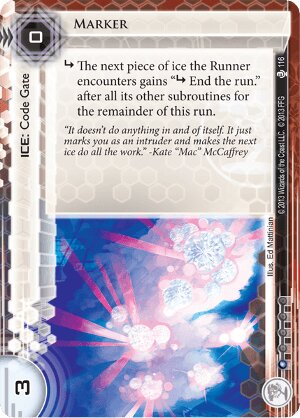 subroutine The next piece of ice the Runner encounters gains "subroutine End the run." after all its other subroutines for the remainder of this run.

"It doesn't do anything in and of itself. It just marks you as an intruder and makes the next ice do all the work." -Kate "Mac" McCaffrey
Illustrated by Ed Mattinian
Decklists with this card

Marker was made in response to the " ice is porous" complaint. In theory, it's a cheaper, in-faction Quandary that doesn't die to Parasite. Seems decent at first.

If the runner has the breaker for the ice after Marker, and they're paying 1 to break 1, you've paid the install cost of Marker to increase the cost to get through the server by 1. That's roughly equal, but probably not worth a deck slot.

Yeah, so uses are limited. I seriously think the Batty thing is probably the best idea, and that's a 3-card combo with positional ice and a psi game, so...good luck with that.

Maker vs Sensei: Two Positional ice that add "end the run" to other ice in the server make for a natural comparison.

Let's start with the easy -- how they are the same, also called why they both fail to get included in decks.

So in both cases, we're going to assume a good set up in an effort to give these the best possible light while burning them in effagy. Imagine Marker or Sensei in front of Excalibur. It's a Str 3 Mythic -- the fewer tools exist in the game break this card mythics than barriers or sentries etc and AIs tend to be either expensive, unwieldy or both. For example, it costs 2 cards for the well-loved Faust and there’s a good bet that Alpha won’t cut it here (except that it can break Marker or Sensei...). As far as unbreakable ICE, this falls just short of the power of Mother Goddess with no other unrezzed ICE.

But if you really want in and you don't have an easy to find AI breaker that will do the job, you have to break the marker or the sensei. And for marker, every decode can do the trick. Sensei... every decoder but 1 unless you have 2 Datasucker tokens.

Now where they differ...

If they have anything that breaks a code gate, clearly Marker fails to Sensei here in every case (except for D4v1d, but even then)... Higher strength by enough to get past Yog.0 is nothing to sneeze at.

If they have nothing that breaks a code gate (and still no AI breaker), either it's early game or the person you are playing against is unprepared, but Marker works better because it gets the same job done for 3 credits cheaper. Not free, because of the 1 cost of install, but almost free in that you can rez even while broke. Of course in both cases, they never hit Excalibur. They jack out voluntarily first. Meaning Excalibur did nothing more than you would had gotten from a Lotus Field -- costs 4 instead of 3+1 for the marker, but is Yog immune and doesn't take two cards in the right order to get it done.

But as bad as Sensei was, it amazes me they felt that reprinting it only worse would help.

Now I hate being all cloudy and grey. Here's the one place where Marker actually can function. Marker is a possible choice in a meta were Yog isn't loved and you are already planning on using cheap taxing ice that is porous due to traces. Marker over Hunter is a 2 server to have fully installed and rezzed. Garrote costs 4to break all of Hunter that way. There it is. Your cornercase: 4 to break every time they run and only 2 of yours to set it up. Me… I’d still rather pay four for a Lotus Field. I’m boring like that.