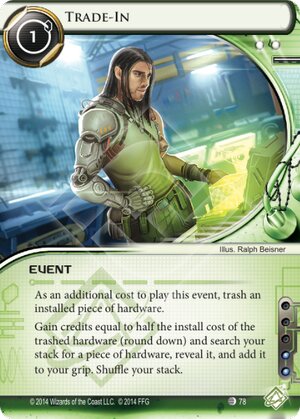 As an additional cost to play this event, trash an installed piece of hardware.

Gain credits equal to half the install cost of the trashed hardware (rounded down) and search your stack for a piece of hardware, reveal it, and add it to your grip. Shuffle your stack.

I think a lot of reviews are missing the point of this card. This should not be viewed as a hardware tutor. That's merely a secondary effect, and quite a useful one if you use it for its primary purpose. What's its primary purpose, you ask? To trash your own console! The tutoring just lets you find the console you want to swap to.

That's right folks, in case you didn't already know, you cannot voluntarily trash your current console to install a new one in its place (without help from this or maybe Enforcer 1.0). So if you're like me, and you like to have several different consoles in your deck, and want to use one or the other depending on the situation, this is the card for you.

Love getting that Astrolabe out early, but want to ultimately swap for The Toolbox or Dinosaurus when the time comes? This will let you do it in style. Already holding your other console in hand, or hosting it on Personal Workshop? Then just tutor for whatever hardware suits your needs. Pick whatever will annoy the corp the most.

Lastly, this will probably never see play in criminal, as Doppelgänger and Desperado are essentially interchangeable, so why bother switching? It might see some play in Anarch, though this too seems far fetched. It really shines in faction—not just because it won't cost influence, but due to the fact that Shapers have all the variety when it comes to consoles. Monolith, is this finally time for your 15 Minutes of fame?

(The Universe of Tomorrow era)
Pikeman 279
I disagree that Desperado and Doppleganger are interchangeable. Suppose that you have a Security Testing, and the only no-ice server is Archives. With Desperado you get 3 credits on the run: with DG you get 2 and a free run but nowhere to use it. — tiedyedvortex 25 Oct 2015
As much as I love Doppleganger, the real reason that Desperado is better is that it works repeatedly each turn. Doppleganger gives you a free run (+1 click), but Desperado gives you up to four free credits (+1 - +4 clicks) — elliotglendale 25 Oct 2015
Well they're certainly not interchangable in every situation. There are definitely times when I perfer one over the other, but I'm not going to enter the debate of which is "better." Suffice it to say, even if you have both consoles in a criminal deck, you still probably won't bother with Trade-In. — Pikeman 29 Oct 2015
Wow! I never realized that runners can only trash programs from a program install, and not other types of cards. "The limit of 1 console per player prevents the Runner from installing a second console, even if the Runner wishes to trash the first." — PureFlight 22 Jan 2016
Honestly, though the idea of using this to trash a console such as Astrolabe to replace it with one for the late game is a nice, and probably the ideal use, it does rely on the idea of having another good console, which excluding the new Maya, shapers really don't. Dinosaurus and Toolbox are both expensive for what they give, Comet is so niche that I don't know what I would do with it, and Monolith is a joke. — Quarg 16 May 2016
The Monolith thing is neat. For anyone who didn't spot it: A properly installed Monolith has a net cost of 6 credits (since it saves you 12 creds in program installs). You could then use this on it to get NINE credits AND a replacement console. I mean, it's still got all the issues playing Monolith does, but it's a pretty hefty swing. — LordRandomness 8 Jun 2016
So I recently used this in a Security Nexus Nasir deck to turn your Astrolabe into a Security Nexus, which saved a bit of influence (since I only needed one), and allowed me to make use of an early-game astrolabe. Unfortunately the Meta at time of writing is the exact opposite of what Nasir wants with asset spam, tags, and kill everywhere. — Quarg 14 Jul 2016
2

So, we finally get a hardware tutor, and it's comparatively underwhelming. Frankly, it's just a little too slow and clunky.

The only time I can see this being played is with Rabbit Hole (Which can automatically give you 'spare' hardware) or Replicator (Which will both give you additional hardwares and benefit from tutoring out a piece to start the chain, as it were)

Fairly weak hardware tutor, but beggars can't be choosers. This card can double your chances of getting your console or other essential hardware up and running in the first few turns, which is no mean feat. It really shines in a small deck such as Andromeda: Dispossessed Ristie or Chaos Theory: Wünderkind, where its power is even more noticeable.

I'm currently running this card in a Sage deck out of Chaos Theory - a deck that relies heavily on having Dinosaurus out early, and a deck that also packs lots of cheap hardware into it for other reasons. Not the best deck I've ever built, but surprisingly effective. This card solved the "I'm out of Diesel and still haven't found that stupid Dino" problem for me handily.