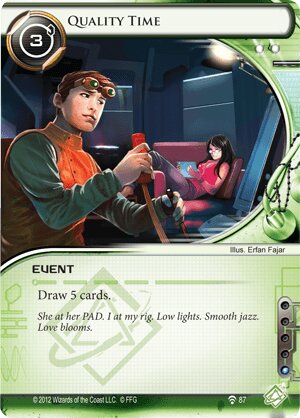 She at her P.A.D. I at my rig. Low lights. Smooth jazz. Love blooms.
Illustrated by Erfan Fajar
Decklists with this card

This is the card draw that nobody really wants to use, but may just have to make do with. Problematically, it can draw you more cards than you can play in a turn if you're not careful (forcing a difficult discard decision), and costs you the not insignificant sum of 3 on top of just making you durdle around for a few clicks. There's a reason Shapers all use Diesel, but only some use Quality Time. But digging through 5 cards for a single is a good rate, and as other factions tend to be weaker on draw the single Influence point it costs makes a world of difference to them. Even Shapers often like to have a couple as Diesel 4-6, and unlike Game Day it works when you have a full grip. It also works well in decks that are already using cards like Public Sympathy and Box-E to increase hand size, but most particularly those using Prepaid VoicePAD to reduce the loss.

More recently it has become less relevant for Anarchs, with the release of I've Had Worse, Vigil and Inject giving them good draw in-faction, as well as Adjusted Chronotype mitigating Wyldside's drawback. Criminal still struggles with card draw however, so they are probably the most ready to use this card, but the credit cost and slow-down makes it a little anti-synergistic for their usual aggression, whilst their slower The Supplier decks prefer Earthrise Hotel and Mr. Li.

Sometimes though, you just need to draw a whole lot of cards, and there are few cards that do it better than Quality Time.

(Chrome City era)
WarpGhost 11
Quality Time is the draw card of choice for Hayley as she can use her double install to thin the cards immediately. Similarly, any build that uses Personal Workshop likes Quality Time as you can drop any expensive programs/hardware onto it without worrying about breaking the bank. — psi_lifeup 6 Jun 2015
3

In addition to drawing attention to the amazing art and flavor of this card, I'd like to provide a slightly more comprehensive look at how to treat your QT right. The problem with Quality Time is that after paying its relatively high credit cost, you are left with a gigantic hand of cards that you have neither the s nor the s to play/install.

She wants your time:

She wants your money:

Without the proper support, your Quality Time will rot in your hand while you click for the credits to actually use it effectively (or worse, you'll use it too soon and then be forced to trash the shiny stuff you drew). Even having strong econ isn't always enough, as 4xclicking a Magnum Opus, followed by Quality Time and its subsequent installs, means 2-3 whole turns before you actually do anything. Not sexy at all.

(The Underway era)
Bigguyforyou518 1721
The third burgeoning category is "She wants your cards." Right now, that's primarily Faust, but there are a trickle of cards coming that are powered by discarding cards. Click 1: QT. Click 2-4, run run run! — Wookiee 6 Aug 2015
[Public Support](http://netrunnerdb.com/en/card/08117) could certainly help the card side of this equation. And yes commitment to proper setup is key if this card is going to be included. — chris_walker 2 Nov 2015
^ I think you mean Public Sympathy. — Runaway 16 Sep 2016