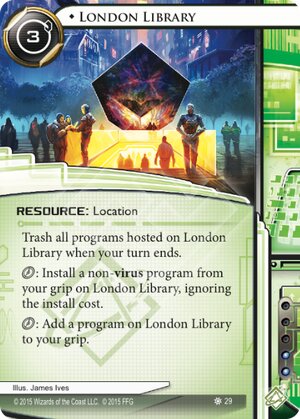 Trash all programs hosted on London Library when your turn ends.

click: Install a non-virus program from your grip on London Library, ignoring the install cost.

click: Add a program on London Library to your grip.

Illustrated by James Ives
Decklists with this card

Most of the reviews for London Library are from way back in good old 2015, and honestly everything they've said is pretty spot on. However the card pool has expanded in a big way and there some new interactions kicking around for London Library! So a small update is in order!

The main combo I've noticed (there are most certainly many more) has to do with the 'Brid' breakers out of Criminal. So we are talking Peregrine, Saker and Golden. Alright so the key to this combo is the fact that the brid breakers uninstall themselves and move back to your grip when you use their ice derzing ability. That allows you to save the that you would normally need to use to recover them off of London Library.

Using London Library you avoid having to pay their stupid high install costs! Instead you can use those credits to break and de-rez ice! Depending on the ice you can do some serious economic damage to the corp! However the bird breakers are still kind of expensive just to operate. That's where Şifr comes in. It can lower the strength of a single piece of ice you encounter each turn to 0. This means once per turn you could derez pretty much any card in the game for an average of about 5 credits.

So how would that work exactly? Well amusing you have both London Library and Şifr installed, your turn would look some thing like this...

2 Install Femme Fatale on London Library to bypass a troublesome piece ice, like Tollbooth or Archer.

3 Run on the sever of your choice. Encounter the ice you wish to derez and lower it's strength to 0 with Şifr. Pay the break cost of the ice then pay 2 to de-rez target ice and add the bird back to your hand. Jack out or continue the run depending on remaining ice in sever.

4 Pick back up Femme Fatale.

Versus glacier decks this is a pretty legit tactic; here are some examples of de-rez costs.

Tollbooth would cost 6 with London Library and Şifr. But they that's Tollbooth for you!

However this tactic isn't super useful, versus ice that has low res costs.

For example Enigma would cost 4 but it only costs 3 to res, so your better off just breaking it for 2 credits with Şifr and Peregrine than de-rezing it.

Komainu is also another good example. Golden would cost 6 to break and then 2 to de-rez, however it only costs 5 to res...So that's not a huge value, especially considering it's only 3 to break with Mongoose

Any how that's all for now.

(Quorum era)
Echo_Chaser 29
Actually, Komainu normally will cost 4 to break and 2 to derez, because you drop to 4 cards in hand with your first click by installing the bird. And since it's your game plan, you are going to do it pretty consistently. Also, Sifr usage makes it somewhat reasonable to float at 4 cards most of the time to avoid discarding, so there's that. — Shieldwall 17 Jan 2017
11 to break and derez DNA Tracker plus 5 for install is 16. I like London Library with a birdie or two. However, it is worth noting that Sifr's normally insignificant use cost would actually matter in a London Library deck as you keep a lot of cards in your hand. — quailman2101 17 Jan 2017
3

Once upon a time, there was an ID that made people scratch their heads: The Professor. You just played it because you like to run janky or you ... um, no idea. Sorry.

I think The Prof gets better and better these days. Why not start this with an expansion pack that's thematically focussed on the UCBB? London Library is so much Professor, maybe that's the card to make him really come back again.

(Breaker Bay era)
Hongkong Koma 265
I forgot the dog breakers: Lady, Rex, Cujo. You never run out of those dog counters. — Hongkong Koma 24 Apr 2015
Beckman wont work here since its a resource and unique... good thoughts on the others! — Blindman 24 Apr 2015
I think HongKong Koma was saying that if you have five clicks, the Library lets you install, install, run, recall, recall for double the fun. — tiedyedvortex 24 Apr 2015
HongKong Koma - why don't you edit your review and add the dogs in? — Ber 24 Apr 2015
@Ber: Tried it, but got a Bad Request. Does not work here, don't know why. — Hongkong Koma 25 Apr 2015
Oh, and did I say [D4v1d](/en/card/06033)? No? That's another one too add! — Hongkong Koma 25 Apr 2015
i don't see why adding atman on it is any good. i mean isnt crypsis just straight better than hosting and removing atmans? You do know you gotta pay for the atman strength right? — GammaCodeX 25 Apr 2015
I know, but I can adjust the strength each turn. Maybe costs some money, but makes Atman more flexible! — Hongkong Koma 26 Apr 2015
Perhaps Alpha and Omega are worth a shot? — cmcadvanced 28 Apr 2015
I've actually put an Andy deck together with several of these ideas - it combos hard into Doppleganger + autoscripter, allowing such amazingly loopy things as Install Femme + Install Femme, run inside job, free run, pick up your femmes... in a single turn. Toss in an overmind for the raw utility of it, and it's just brutal. — Shannon.L 22 May 2015
More importantly, Crypsis is actually a virus and CAN'T be used with Library. — LordRandomness 31 Jan 2016
I believe his point was that you could just click Crypsis to add a counter, then run instead of clicking LL twice. Unless you're using the same Atman for multiple ice that have medium-high strength... but then why not just install it and keep it? — EnderA 20 Feb 2016
Card really squeezes your clicks. If you play Twch Writer, you can at least turn those clicks into credits. Looking for other synergies because I want this to work. — FightingWalloon 3 Nov 2016
3

I am not normally one to write a review for a card that i haven't played but i feel that theirs so much potential in this card that just mentioning what it can do is worth reviewing. I feel this card will find a spot somewhere the sheer amount it can do whether it be in or out of faction.

So what dose it work with well just about anything with a power counter D4v1d, Overmind and the Dogs are to name but a few, Femme Fatale also works with the same approach. if your going with bouncing programs around then Autoscripter maybe worth looking at or LLDS Processor

But maybe your not gonna return them maybe your gonna let em drop off and use Retrieval Run or Scavenge the program into play. I am not 100% sure but i think Sacrificial Construct would actually work to keep the program for the next turn essentially saving you 2 clicks tho pulling an All-nighter would save you the same amount of clicks.

These are just what i came up with but considering their will be new cards and that theirs so many different combos for all factions it seems like a card that will be good somewhere and deserves some trying out.

(Breaker Bay era)
Pinkwarrior 2330
Sacrificial Construct would keep the program till the next turn but since it's still hosted on London Library, it will indeed trash after that. — RubbishyUsername 25 Apr 2015
@RubbishyUsername I think the idea is then to use a click in the next turn to pull it back (say you need D4v1d counters to get into a server but can't afford the time to keep bouncing it) — zithith 29 Apr 2015
That is indeed the idea Zithith, I have had time to play around with this since and it is indeed powerful though rather click consuming i am currently thinking autoscripter / retrival run is the better way to go. — Pinkwarrior 30 Apr 2015
0

EDIT: ehh, I guess there was already a preexisting scenario with Scheherazade and Caissa programs. Unfortunately, only Pawn can move from London Library, but since it was free to begin with, the entire thing was pointless.

(Breaker Bay era)
RubbishyUsername 438
There will be no further Caissa programs. Reina Roja is the queen. — flott 26 Apr 2015
Newish player - So a card installed on LL can be used like any other installed card? — futureguy 15 May 2015
@futureguy- Yes, they can be used. Similar to programs hosted on Djinn or Scheherazade. — ogrillion 17 May 2015
Update: as of FAQ 2.2, moving a Caïssa from London Library so it is no longer hosted there is a legal action. — harrison 22 Oct 2015
If that was ever the case, it is once again illegal per the latest FAQ. — seurimas 19 Apr 2016