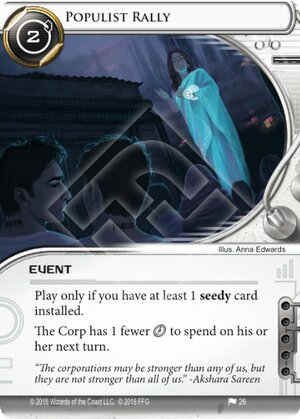 Play only if you have a seedy card installed.

The Corp gets -1 allotted click for their next turn.

"The corporations may be stronger than any of us, but they are not stronger than all of us." -Akshara Sareen
Illustrated by Anna Edwards
Decklists with this card

Is this card nothing but a problem looking for a solution or is it actually a useful strategic tool?

So it looks like there isn't that much that you can do to mess up the corp's plans with Populist Rally. Is it useless?

EDIT for Salsette Island: Taking away a will also prevent the corp from using Jeeves in a lot of cases.

(Business First era)
Zakalwe 479
I've been running a Fisk deck on Jinteki.net with some success recently. It's got the 3 shards, the seminars, and even a couple Scrubbers. I'd been planning on putting this card in when it was released. It'd be loads of fun to stick the corp with 12 cards and only 2 clicks. But looking at it again, I don't think I can justify its deck space or play cost. — quailman2101 28 Mar 2016
I wish this was playable with ANY seedy cards installed, not just Runner's. — LynxMegaCorp 29 Mar 2016
There's another big thing this locks out: Fast Advance. It prevents Biotic Labor + score a 3/2, it prevents scoring 2/1s out of hand. — LordRandomness 5 Jun 2016
1

So it might not be practical most of the time, but this DOES stack. That means you can play two of them to stop a predicted "Advance, Advance, Score" (e.g. on a suspected IAA'd 4/2) or three of them to cancel the Corp's clicks entirely (at the cost of most or all of your own though, so outside of specific situations mostly involving extra Runner clicks it's not worth it)

This aside, you can also stop a predicted fast advance with just one copy which can be game-changing if you can snipe the prospective Agenda from HQ and/or the game is currently tied up at 6/6 and you need another turn to try and squeeze a point out of somewhere. Populist Rally can give you confidence that they won't score out next turn, and combined with any Event recursion you can create a Clot style effect that locks out fast advance but without the option to purge.

Or you could just run this alongside Clot to prevent them from purging it! Either option is fine, although this by itself is much more limited against FA but costs no influence in return. If you generally just find yourself needing to squeeze out one or two more turns against FA and can't spare the influence for Clot, it can be very valuable.

Finally, it makes it harder for the Corp to flatline you using something like SEA/Scorch/Scorch. For 2 creds and a click, you can stop worrying about that until next turn. This can give you time to win, find protection, hit HQ with an Imp to get the SEA Source out of there, or even just let you make a run this turn without fear of death (since next turn you can simply not run in order to avoid SEA Source)

Essentially, denying the corp a click denies them options which might have been very painful for you. It's relatively versatile and hedges out some very bad outcomes, offering you a sense of security in whatever else you're doing this turn.

Bloo Moose, our favorite martian fortress, is the prefect place to hold your Populist Rally. If you are just a few creds short from breaking into that scary server and you smell a GFI on the horizon, play this and build up some more before you make a run. Also works deviously well with various Viruses, and also prevents Jeeves Model Bioroids shenanigans. Pretty good, I reckon.

(Crimson Dust era)
Handsome Jack 1601
Good catch. Bloo Moose not only makes it playable (it is probably in almost every runner deck now) but it also refunds the play cost. Probably a good one of. — quailman2101 11 Sep 2017