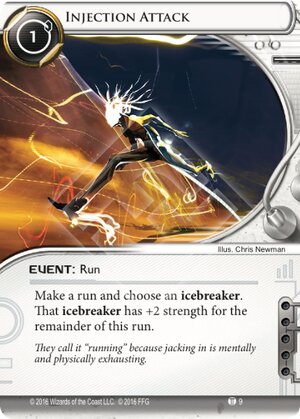 Choose 1 installed icebreaker and run any server. During that run, the chosen icebreaker gets +2 strength.

They call it "running" because jacking in is mentally and physically exhausting.
Illustrated by Chris Newman
Decklists with this card

Efficiency - at 1 you are typically saving at least 1 in addition to 1 of compression - bear in mind that this efficiency increases for each piece of ICE you break with that breaker, making it useful against glacier builds. Obviously this card functions better with breakers that will cost more than 1 per increase in strength (e.g., Study Guide, Pipeline, Femme Fatale, Inti, or Brahman - although Shapers are likely better off with some combination of Net-Ready Eyes or The Personal Touch)

It is particularly valuable when breaking all ICE with one AI breaker, e.g., it could potentially save you several cards on Faust

Some value as a surprise attack, perhaps allowing an unexpected access

Precludes use of other, higher impact, run events

This will play well with fixed strength breakers like Mimic, Yog.0, or even Chameleon, all of which are still in regular rotation.

Could be used to get Nfr up to strength.

Could help land a Crescentus or Emergency Shutdown

Saves 1 once in a blue moon on Enhanced Login Protocol

Might offset a lack of stealth credits for Switchblade, Refractor, or Dagger.

Could boost Armand "Geist" Walker's cloud breakers (Shiv, Crowbar, and Spike) while setting up. Note that the single use greatly reduces efficiency, however.

In summary, this card may see some play in Anarch and Criminal although I don't see this card being used very often in the current meta outside of Ken or perhaps the occasional Null or Faust deck.

Written after release of Blood Money