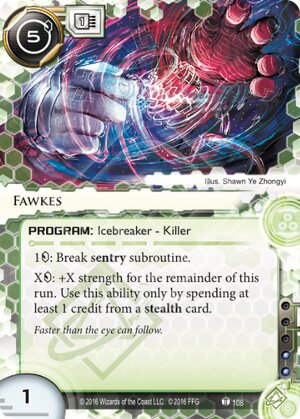 Xcredit: +X strength for the remainder of this run. Use this ability only by spending at least 1 credit from a stealth card.

Faster than the eye can follow.
Illustrated by Shawn Ye Zhongyi
Decklists with this card

There's something interesting with Fawkes in that for a naked Smoke (I mean a Smoke with no other stealth credit source than her own — don't feel aroused) it's basically a Gordian Blade for sentries. Keep your stealth credit for Fawkes use only and it's like it has a 2 strength value.

From the magician-themed breakers (Houdini and Blackstone being the 2 others — remind that they keep their strength during the whole run), it's far from being the more efficient, but is the one that give you the more leeway in pumping, since whatever the higher strength of sentries stacked on a server, you'll never ever need more than 1 stealth to deal with every sentries during that run.

Well, that's in case there is no surprise : an unrezzed Archer behind a Veritas is a problem, considering that throwing away credits just in case is a problem. Also, the Corroder/Gordian Blade pattern is nice, but it has its limit against pieces of ice with high strength and/or many subs. There stand a problem, because due to Mimic popular sentries are sub-heavy or have strength > 3, often both. Hence, they're taxing for Fawkes.

Now a simple solution could be playing more stealth provider, something you want if you play a stealth deck after all. From that point, I'm not sold of Fawkes being better than Dagger, a card that is just so-so for many and plain bad for some. Comparisons :

Is it lost ? Maybe time for dusting off Deus X and Sharpshooter ? That takes slots. Better play Dagger and more Net Mercur, I think.