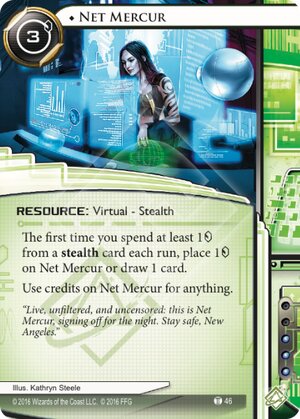 The first time you spend at least 1credit from a stealth card each run, place 1credit on Net Mercur or draw 1 card.

Use credits on Net Mercur for anything.

"Live, unfiltered, and uncensored: this is Net Mercur, signing off for the night. Stay safe, New Angeles."
Illustrated by Kathryn Steele
Decklists with this card

One of the strongest cards released up to this point in the Flashpoint Cycle which is already filled with incredibly powerful runner cards.

This card has opened up a lot of space in stealth decks. It allows Shaper stealth to run consoles other than Mirror and with Ele "Smoke" Scovak: Cynosure of the Net or hardware stealth credits you can afford to have less Cloaks in your deck for other programs such as Datasucker.

Being able to power itself is incredible, but combined with other strong cards, such as Patron you have a Diesel every turn. In Criminal who already plays "on a successful run" you can combine this with the criminal staples Desperado, John Masanori and Security Testing to get most of a free Deuces Wild each turn.

Lastly, is the extremely powerful last line. Being able to spend the credits for anything - traces, installing cards, trash costs, etc. - can't be overstated. I'm really looking forward to this year's store champion season and the rise of stealth.

This card is taking pride of place in any Smoke decks that come down the line. The synergy with Mirror and Ele "Smoke" Scovak: Cynosure of the Net are obvious.

One thing that isn't obvious at first look is that this card is self triggering. Spending a credit from Net Mercur triggers it because Net Mercur is also stealth. You could alternately use that for more stealth credits, or more cards.

The next seriously nice thing is that unlike almost any other "recurring" credit generation this one says "Use credits for ANYTHING". That could mean personal workshop, icebreakers, events, trashing whatever. So the trigger happens all the time.

Couple that with the fact that the trigger happens EACH RUN and you've got a great econ source. Pairs well with Encore Blackstone and Data Breach which start triggering additional runs which net additional cards.

I have heard it said that this doesn't make Mirror better than Astrolabe. I will concur in that mirror relies on R&D runs specifically, but astrolabe requires your opponent to do something specific so you can't trigger it yourself. In this time of asset spam decks and Near-Earth Hub: Broadcast Center domination it might look like astro is the way to go but I think the build-up for stealth is going to enjoy the flexibility of making more stealth runs more quickly and more consistently.

(Escalation era)
killj0y 60
This card is good, really good. A little too good I think. In my experience, stealth decks were already very difficult to beat unless you could win quickly. A normal runner might use Maker's Eye and score a couple points. You'd think, "That sucks, but at least they spent eight credits doing it. Now I might have a scoring window." Once stealth is set up, they spend very little or nothing per run. So I would usually try and build a huge server (an impossibility for some Corporations) in in effort to make them run out of stealth credits. The many merits of this card have been stated nicely. Suffice it to say, it will be very very difficult for the runner to run out of stealth credits with this installed. — quailman2101 27 Oct 2016
Net Mercur triggering itself doesn't happen all the time, it's only the first stealth credit you spend during a run. So sadly you can use it to pay for Events and get a credit back. — CrashT 4 Nov 2016